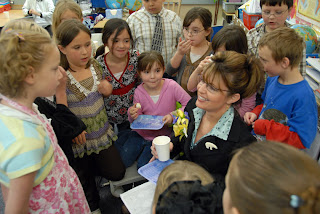 Yesterday, in a post on Dan Fagan’s latest PDS induced screed, we mentioned the issue of Gov. Palin’s position on school vouchers in Alaska.

Gov. Palin clarified her position on this issue in an interview she gave with Dimitri Vassilaros of the Pittsburgh Tribune-Review in July 2007. (The can listen to the entire interview in three parts here.)

Our good friend Mel was kind enough to transcribe the portion of the interview in which Gov. Palin discusses vouchers:

VASSILAROS: “School districts must be held accountable at all times for the manner in which they expend public money.” Why no mention of vouchers? Because I was on the website and I couldn’t find anything mentioning of vouchers? You support vouchers?

PALIN: They’re unconstitutional in our state, so I can’t support them. And I’m not proposing to change anything in that arena either. Our constitution mandates so few services that have to be provided [to] Alaskans, and a good free education for all Alaskan students is one service mandated. So, I’m going to make sure that we’re doing that right, and we’re adequately funding it. So, we’ll have our hands full just with that public education that needs to be provided. My four kids [are] in public school; my dad, my brother — lots of school teachers in my family; I have an affinity for public schools and want to make sure that we’re providing the best service there. So, again, with my hands full there, I’m not going to start challenging our constitution on vouchers.

VASSILAROS: What does the constitution say? It doesn’t mention vouchers?

PALIN: It does. Well, it mentions… public funding for public schools is the only thing that’s going to be allowed, yeah. So, I guess through omission of an allowance of vouchers we can read that as it’s unconstitutional.

VASSILAROS: Funding for public schools, that’s the only thing that’s allowed. All right.

PALIN: Right. Right, right. Even though legislators this go around even in their budget, in that capital budget, had proposed dollars (and I’m a Christian), but they proposed dollars for a couple of private Christian schools. It’s unconstitutional, it’s illegal, you can’t do that. I had to go in there and veto those things, and, of course, was accused then of being, “Oh, you’re not a real conservative, or a real Republican. Otherwise, you would have fought for that.” No, if it’s illegal, it’s illegal.

Please note this does not mean that Gov. Palin doesn’t support school vouchers nationally. This is an Alaska constitutional issue. This is similar to her support of benefits for same sex couples in Alaska. Gov. Palin is a strict constructionist in the Ron Paul mold when it comes to her state’s constitution.

Her healthy constitutional obsession was noted in an article about Palin written in 2006 when she was running for governor:

You can ask Palin almost anything and she’ll end up on Alaska’s constitution and her beliefs that the best government is small and that competition is good, and what an honor it would be to serve you.

She chose to give her inaugural address in Fairbanks, though the address had never been given there before. She did so to honor the fact that Fairbanks was the location of the Alaska Constitutional Convention in 1956, and her address that day was a discourse on her state’s constitution. That’s how seriously she takes it. She calls it her blueprint for governing.

Such stringent support of constitutional rights is part of what makes Sarah Palin so attractive to libertarian-leaning conservatives like myself and many others here. We get what she’s saying, and we like it.