Last week the Anchorage Daily News released the results of their public records request for the emails Gov. Palin sent and received on one single day – August 27, just a few days before she was introduced to the nation as John McCain’s running mate.

I’m not sure what juicy tidbits the ADN were hoping to find, but they were clearly dejected by the discovery that their governor is hard working and wildly, ridiculously popular.

Because I’m shamelessly nosy, I looked at all 77 pages of emails that were sent to and from the Guv that day. Here’s what I found by way of inference.

She’s a good executive. She keeps her staff on their toes by asking the right questions. She is personable with them, but it’s clear that she’s the boss, and they respect her as such. She might tell her constituents to call her “Sarah,” but her staff calls her “Governor.”

Obviously, she’s incredibly busy. In the course of a single day she gave a speech, approved speeches, appointed a new chief of staff, approved press releases, read policy reports, planned travel, and discussed gasline issues and an Appeals Court appointment. And that’s only what I was able to glean from the emails. I’m sure she did more than what appears now in cyber posterity. (Unless you Twitter your life away, a good portion of what you do all day is not chronicled in emails or IMs.)

The ADN glossed over the most conspicuous class of emails peppered throughout the job-related ones: the spontaneous paeans from Palin’s constituents and even from her constituents’ friends!

Here’s an example of the latter from a veteran who lives in Tennessee (click on all the photos to enlarge them):

Those who know her, love her; those who don’t know her, hear about her from their Alaskan friends and love her from afar…

But the praise from the Lower 48 pales in comparison to the email panegyrics of ordinary Alaskans, like this waitress from Anchorage:

This is the sort of rhapsodic praise only a politician with an 80% approval rating gets. Even this Democrat from Fairbanks drops her a line of thanks: 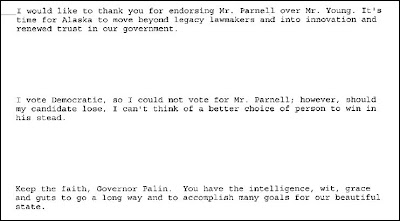 Though I can’t prove it, I’m willing to bet that this humble email from a 59-year-old Joe Six-Pack from Wasilla meant the most to her:

The Joe-Six Packs of Alaska clearly love their Sarah. Why? Because she looks out for them and makes government work for them. She suspended the state’s fuel tax, and that brought the price of gas down 8 cents and “every little bit helps”:

Trig’s Mom received numerous emails from other parents of special needs children around the country, like this one from a pastor in Michigan:

How much do you want to bet that pastor is now a Team Sarah member (at least in his heart, if not in the literal sense)? He ended his email with this little postscript:

But perhaps the most striking bit of historical irony is the email from Bill McAllister detailing Palin’s press availability and interview schedule for the week of the RNC convention. Even the hebetudinous ADN noticed it:

“Here’s what I’ve got for you for media to this point at the RNC,” wrote McAllister, her communications director.

None of those interviews happened. Palin was largely cut off from the media after McCain announced her as his pick, though selected journalists eventually got interviews.

None of them happened, and I think some of them should have. One paragraph in that McAllister email made me sit up and shout at my computer screen (a regular occurrence, I admit):

So, before she was named to the ticket they considered her competent enough to talk to the media, but the minute she’s introduced as the vp candidate they hide her away.

The McCain campaign sent Palin to do high-stakes interviews with Charlie Gibson and Katie Couric, before Palin had held even one press conference with the reporters on the trail. That is so wrong that I can’t even begin to explain how wrong it is, and whoever made that decision was suffering from the worst case of recto-cranial inversion in the history of media relations.

I don’t care how much you hate “the media,” the poor faceless schlubs — wire-service and newspaper reporters — who are out there covering the campaign on a daily basis ought to get at least an occasional press conference with the candidates. I’m convinced that a lot of the negativity toward Palin was a result of the resentment felt by ordinary reporters over their lack of access. Palin is a likeable personality, she started out in the TV business, and if she had been allowed to deal directly with the press, the result would have been a lot better than sending out idiot “spokesmen” like Tucker Bounds to speak on her behalf.

If they’d have done an impromptu press conference on the day she was announced — before the reporters had time to research their “gotcha” questions — it would have made all the difference in the world.

That last suggestion is so brilliant and so obvious that I can’t help wondering a) why no one else thought of it and/or b) why RSM wasn’t running the campaign.

I wish the Maverick’s hired meatheads would explain to me why Palin couldn’t keep or at least reschedule the interviews with Newsweek, NPR, Cal Thomas, USA Today, National Review, Fox News, and Bloomberg. It’s as if “someone” wanted to make sure Gibson and Couric had a ratings bonanza. Keep her away from the competition and you heighten the interest. You also heighten the interviewers’ stakes. These two favored interviewers felt the need to grill the candidate on behalf of their colleagues who didn’t have the chance to ask her even a softball question. That’s the charitable explanation of Gibson and Couric’s behavior. The uncharitable one is that they had it in for her no matter what. Both are valid.

And the damage has now been done. Though she claims not to regret her decision to run with McCain, I can’t help but wonder if she looks back on August 27 with nostalgia. She can never go home again. The Alaska of August 27 is gone forever, and so is her 80% approval rating. It was bound to go down eventually, but not by such a painful trajectory.

Ah, well, she’s the last person in the world to whine about it. She probably doesn’t have time to look back. She just keeps running like the happy warrior she is.

There were no other major discoveries in the Palin emails of August 27, but I’m sure the ADN won’t let that stop them. Under Jabba the Hutt’s fearless leadership the ADN will continue to leave no Palin dumpster un-dived.

Upon further examination, I think I might have discovered a new scandal the ADN should investigate. Take a look at this email exchange between Palin and her assistant and note the the part I highlighted: 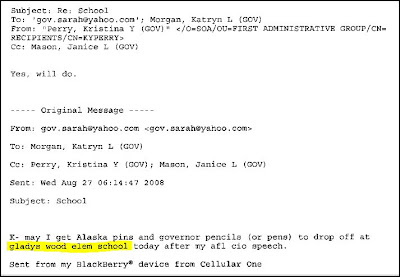 She’s giving away state property to her brother’s students! Impeach her now, damn it! She’s gone too far this time. She must be stopped.