Anything They Can Do, She Can Do Better 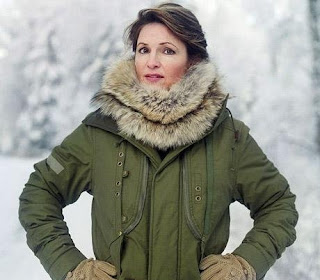 Michael Carey has an insightful commentary in the ADN on Gov. Palin’s role as the new face of Alaska.

Carey discovered that when folks outside the Great Land hear the word Alaska, they no longer think of igloos and dog sleds, they think of Sarah Palin.

In Manhattan the name is often accompanied by a primal scream, as evinced by his encounter with a NYC hotel clerk:

A staffer at the information desk answered my questions cheerfully, then she asked: “You’re not from around here, are you?”

“Where are you from?”

Then she started fumbling with the papers on her desk. I thought she was looking for a cross to ward off evil, but a former New Yorker here in Anchorage later suggested, “She was probably searching for her gun.”

Carey pinpoints a reason for this leftwing panic:

Why do they scream? The easy answer is they’re Democrats or independents who voted for Barack Obama and loathe conservative Republicans. In some Manhattan precincts, Obama received more than 80 percent of the vote. But I also sensed a certain fear of Sarah Palin. The screamers know Obama came from nowhere to become president. What if she repeats the performance?

Though many blue staters admired Gov. Palin (C4P’s blue state dominant readership is a testament to this), there was also a vicious and demeaning contempt for her among denizens of the LA/NYC/DC axis:

Yet there are voters along the Hudson River who turned out for Palin — members of my own family in New Jersey, for instance. And the disdain for Palin is built on something of a caricature or cartoon, a caricature/cartoon Jon Stewart brilliantly exploited for weeks on “The Daily Show.” For Stewart, Alaska is Dogpatch and Sarah Palin is Gov. Daisy Mae.

Many of you will recall Jon Stewart’s “f*** you!” rant against Palin during the election. He was supposedly outraged by her “divisive” praise of the “real America.” He never seemed to understand that praising people in a specific region for being patriotic does not ipso facto mean that the other regions of the country are unpatriotic. She was not demeaning NYC when she praised the people of rural Pennsylvania and Ohio, but Jon Stewart was certainly demeaning Sarah Palin’s small town background. So who was being divisive, Jon?

Who was it who referred to Palin’s hometown as “Wasilly”? Who held up a photo on CNN of Wasilla’s town hall and compared it to a bait shop? Did Sarah Palin make fun of your city? Or did you make fun of hers?

You’d think the presidential campaign was about conservatives picking on urbanites…. I live in a city with a population of more than a million people and I never thought the GOP singled me out as not being a “real American.”

If anything, it appeared that big-city liberals were tapping into prejudices about small-town America to belittle the governor of Alaska.

Many of us were especially shocked by the efforts of the left to sexualize Palin in the crudest and most demeaning manner. It wasn’t just a harmless celebration of her wholesome sex appeal. We have no problem with that, and I’m sure the Guv doesn’t either (after all, she winked at us). I’m talking about this, and this, and this, and this.

Carey saw this too:

From the “I-scream-when-I-hear-the-name-Palin” perspective, her good looks are a form of cheating. As if women with “bad” ideas about abortion, gun control and oil drilling in the Arctic shouldn’t be allowed to package them in a winning appearance.

I’m tired of the stereotype of conservatives as sexphobic scolds. That’s one of the reasons why I, as a conservative woman, posted that “stimulating” pic yesterday for a few laughs. JR would never do that because, as a man who respects the Guv, he doesn’t want to appear as if he’s diminishing her in any way — even in the most innocent way (like Glenn Beck calling her a “hot grandma”). But I’m a woman too, and as a woman, I can say: You go, girl! Wear those boots, Sarah. Show ’em that conservatives can be all that and bag of bagels too.

Laura Vanderkam, the writer that RSM recommended and we seconded to ghost write Palin’s book (and she really wants the gig too!), thinks that Palin is a breath of fresh air for women:

Sarah Palin — mother, governor, moose hunter — burst onto the national scene in August with a face and a life story that launched a thousand editorials. Not only has she achieved great professional success, she also has a healthy marriage steamy enough to produce five children. Like Hillary Clinton, she took her husband’s name; but unlike Hillary, it was she who first made the family name famous.

As our friend Josh Painter noted, Palin has become so many things to so many people. Jennifer Rubin saw her as a Rorschach test with everyone seeing in her what they wanted to see regardless of the truth. A woman who named her youngest son after Van Halen, kept the bars open late when she was mayor, admitted to smoking pot when it was legal, and grew up in a libertarian haven for Sixties “End-of-the-Roaders” was typecast as a puritanical religious wacko by our leftwing media.

Across the pond, Janet Daley noted in the UK Telegraph the similarities between the left’s treatment of Palin and their treatment of that other famous tough-as-nails woman leader:

Like Margaret Thatcher before her, Mrs Palin is coming in for both barrels of Left-wing contempt: misogyny and snobbery. Where Lady Thatcher was dismissed as a “grocer’s daughter” by people who called themselves egalitarian, Mrs Palin is regarded as a small-town nobody by those who claim to represent “ordinary people”.

What the metropolitan sophisticates failed to understand in the 1980s when Thatcher won election after election is even more the case in the US: most (and I do mean most) ordinary people actually believe in the basic decencies, the “small-town values”, of family, marital fidelity, and personal responsibility. They believe in and honour them – even if they do not manage to uphold them.

Yes, Sarah Palin does indeed appeal to the “ordinary people” (like us “ordinary barbarians”), but she also evokes something quite out of the ordinary — that mythic frontier ethos.

[W]hen I heard Sarah Palin’s convention speech and thought about how so many smart–but parochially “cosmopolitan”–people miss the enormous appeal of her persona. She may have wrangled fish rather than cattle, but she shares the cowgirl tradition.

Palin represents a certain ideal of American womanhood. It is easy to joke about moose-hunting and all the rest of it, but she taps into an ancient American tradition. To put it another way, she wouldn’t have the same impact if she came from Alabama or Ohio. Her westernness, the sense of the frontier, pioneering spirit is a significant, telling, part of her appeal.

On the one hand, she represents the pioneering spirit that built the United States in the first place; on the other there’s an element in which, culturally anyway, she represents the common sense integrity of the frontier in contrast to the intrigue and squalor of viperous Washington.

It was only a matter of time before someone connected Palin to that quintessential gun-toting western woman of legend. And I’m glad that that someone was the brilliant Camille Paglia:

The gun-toting Sarah Palin is like Annie Oakley, a brash ambassador from America’s pioneer past. She immediately reminded me of the frontier women of the Western states, which first granted women the right to vote after the Civil War — long before the federal amendment guaranteeing universal woman suffrage was passed in 1919. Frontier women faced the same harsh challenges and had to tackle the same chores as men did — which is why men could regard them as equals, unlike the genteel, corseted ladies of the Eastern seaboard, which fought granting women the vote right to the bitter end.

Paglia’s comparison of Alaska to the frontier West is apt. Wyoming, Utah, Idaho, and Colorado, whose terrain resembles that of Alaska, were the first to enfranchise women. So is the comparison of Palin to Annie Oakley, the legendary female sharpshooter who could slice a playing card at the thin edge from 30 paces. Oakley, like Palin, was deeply religious and read the Bible daily. The self-confident, genially contemptuous song lyrics that Irving Berlin put into Oakley’s mouth — “Anything you can do, I can do better / I can do anything better than you” — as she went up against her male sharpshooter competitors in “Annie Get Your Gun,” the 1946 musical based on her life, might well apply to Palin’s bold forays into territories usually ruled by men, such as the Alaskan oil and gas commission.

The song could easily apply to Sarah Palin, but it should be noted that she actually can bake a pie.

This is not to suggest that Alaska is some wild frontier land — though gold rushes, volcano eruptions, and a lady governor who pilots fishing trawlers in storms might suggest otherwise. Anchorage is as urbanized as any other modern metropolis — aside from the occasional moose wandering the streets. (Homelessness is a problem in every major city. In Alaska, they have homeless moose).

Sarah Palin’s Alaska isn’t the frontier outpost of Jack London novels any more than Ronald Reagan’s California was the wild west of Hollywood films. Yet Reagan purposely evoked the mystique of the west. That’s why his campaign aides had him photographed in a white cowboy hat. He was the good guy in the white stetson, the Henry Fonda character in High Noon. 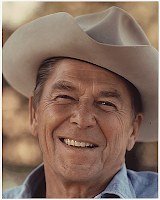 It’s all part of what George H. W. Bush called “the vision thing.”

The PBS American Experience documentary on Reagan noted this quality:

As President, Ronald Reagan evoked a simpler place and a simpler time. Small towns, patriotic values, family, and community. An idealized America that no longer was. That perhaps never was. Even for Ronald Reagan.

Reagan evoked these values and made Americans believe in them. Sure, they were idealized and perhaps even mythical, but he evoked them effectively.

And it was not cynical manipulation. Reagan relished the history and lore of the American West. He had California in his blood, and California wasn’t a place to him — it was an idea. It meant freedom and possibility and wide open spaces under a blue sky and a bright warm sun.

Sarah Palin and her family relish the eccentricities and lore of the Last Frontier with the same passion that Ronald Reagan loved his California.

Palin evokes for us the same sort of idealized and perhaps somewhat mythic past. That’s what great communicators do. Great leaders inspire people.

Michael Carey notes all of this mythologizing from the Lower 48, but he doesn’t seem to begrudge us our myths — perhaps because he, like Sarah Palin, understands that we need them:

Since the United States was formed 200-plus years ago and Americans began to move westward, the West has been delivering curiosities to the big cities of the East. Performers like Buffalo Bill and Annie Oakley. Political leaders like William Jennings Bryan and Barry Goldwater. Outsiders who seem alien and exotic.

Sarah Palin is in this tradition. Annie Oakley gone Goldwater. A marvelous combination in Anchorage but one to provoke screams on Madison Avenue.

The Annie Oakley comparisons came first, but the Goldwater comparisons have been picking up steam lately.

Sarah Palin has none of Barry Goldwater’s liabilities. Barry Goldwater didn’t look like this or draw crowds like this. The analogy is absurd in that regard. But Palin can certainly benefit from a comparison to Goldwater’s strengths. So, by all means, compare her to Goldwater. Her “extremism” as a western conservative “is no vice.”

And she can do anything you leftwing snots can do, better… and in high heels.