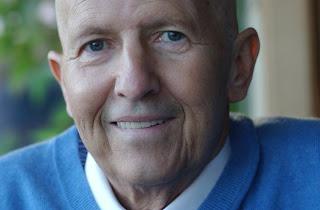 Governor Sarah Palin today ordered state flags to be lowered to half-staff in honor and memory of Mat-Su Borough Mayor and former state legislator Curt Menard. Mayor Menard died this morning after a battle with cancer.

“Alaska has lost an amazing and compassionate man,” Governor Palin said. “Mayor Menard will be remembered as a Christian man of true character who always had his priorities right. He will be deeply missed by my family and all those who were touched by his life. Our thoughts and prayers are with his family during this difficult time.”

The ADN has an article on Dr. Menard’s passing.

Back in Palmer, Curtis Menard Sr. was sitting at home one day when his wife arrived with a new puppy, a bloodhound. She decided the Palin girls needed a dog to keep them company in Juneau. Sarah named the cuddly pup AGIA, after the Alaska Gasline Inducement Act, a bill working its way through the legislature that would allow the state to license an oil company to build the 1,715-mile natural gas pipeline from Prudhoe Bay to the Alberta hub in Canada. Lawmakers approved AGIA, and the license was eventually awarded to a Canadian company, Trans-Canada Alaska.

As for AGIA the dog, he was a hit with the Palin girls but made a mess of the governor’s mansion. Everyone was too busy to train him. When the family returned to Wasilla that summer, AGIA went with them, and Sarah asked if the Menards wouldn’t mind taking him back. She figured AGIA deserved a better fate and would have more fun running around the Menard homestead than being cooped up in a mansion.

Last September, The New York Times did a story on the hometown reaction to Gov. Palin’s RNC speech. The NYT’s Kim Severson sat through the speech with a group of Palin friends at Dr. Menard’s home:

There was Curt Menard, her dentist and a political mentor. His boy, Curtis, was one of Ms. Palin’s best friends and godfather to her eldest son, Track. Curtis died in a plane crash seven years ago.

Mr. Menard’s house, which looks over Memory Lake and the Chugach mountain range, is decorated with several framed posters of polar bears, stuffed moose heads and photographs of his family and his years in the state legislature.

His late son’s 1982 yearbook was on the kitchen table. On the front page, a teenaged Sarah Palin had written, “Thanks for giving us “athletic” girls your support. God Bless You always.”

Mr. Menard moved to this area of Alaska in 1972, when it was much more remote. Now it has grown to about 60,000 people, and is considered a bedroom community of Anchorage, which is almost an hour’s drive south.

Like almost everyone in Alaska this night — supporter or not — he tried not to be nervous for the hometown girl’s big debut.

“In my opinion she’ll be nervous until she gets out there and starts,” he said. “Once she starts, she’ll do fine.”

At the end [of Palin’s RNC speech], everyone applauded and wiped away tears.

“I give her an A-plus-plus,” said her mentor, Mr. Menard. “It was stronger and had more emphasis than I thought it would, and I could tell she meant it.”

I’m glad Dr. Menard lived to see the young reformer he mentored give that speech that night.

UPDATED by Mel: By all accounts, Dr. Menard was an outstanding public servant, a great father, and a remarkable person (a right-handed dentist who retrained himself to work with his left hand and a hook after he lost his right arm in an accident) who was greatly respected in Alaska and in the Mat-Su Valley. More information about Dr. Menard can be found here.

Chuck Heath, Governor Palin’s father, was on the Eddie Burke radio program this afternoon, and expressed his admiration for Dr. Menard. Mr. Heath said that in the passing of Dr. Menard he had lost his best friend. Mr. Heath is planning to speak at Dr. Menard’s funeral service on Saturday.

UPDATE BY JR:
Governor Palin on the passing of Dr. Menard: