Senator Elton pledged his allegiance to President Obama last summer. We wish him well as he moves on and hope that he uses this job for Alaska’s benefit – to advance the state’s oil and gas issues, including the natural gas pipeline, and to work diligently to remove the barriers imposed upon all states that want to open up their shores to off-shore drilling.

I hope he can represent Alaskans by opening ANWR, conveying the importance of responsible mining development, and building roads­ ­- all issues crucial to the future of our state.

I seriously doubt that Kim Elton will be of much help to Alaska on the issues Governor Palin addresses above.

He did his hatchet job on Governor Palin on behalf of the national Democratic Party and now he is cashing in “the Chicago way.” 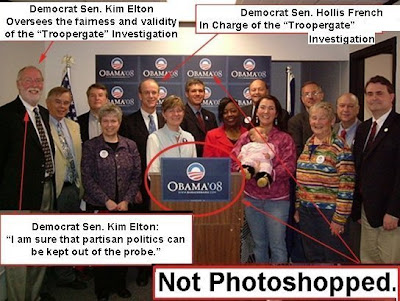 UPDATE by Ramrocks: Jack M over at AofSHQ offers his take on this:

And now one of the chief architects of the highly public and unsubstantiated smear job has been awarded a plum job in the Obama administration. Being the “Director of Alaskan Affairs” in Interior is a pretty sweet gig with no real responsibilities. You basically show up around 2:00 PM, call Juneau to make sure the pipeline is still operating, and then bail around 2:15 PM to go thank the Good Lord that you aren’t freezing your ass off in Alaska anymore. All while pulling down a salary that would make the hard ass ice fisherman on Deadliest Catch blush.

I just know that a political rival of Senator Obama’s was baselessly smeared and the man who led the charge is now the recipient of a sweet, sweet Administration gig. I report, you decide.

Meanwhile, as the Dow craters and the unemployment rate begins to trickle upwards, Peggy Noonan rests easy knowing that the White House chef will not be asked to learn a recipe in which “moose” serves as a prominent ingredient instead of arugula.