In a Compass piece last Sunday in the Anchorage Daily News, Larry Wood breathlessly declared that AGIA is dead. In fact, he thinks any pipeline to the Lower 48 is dead.

Apparently no one told the Denali pipeline team. Poor BP and ConocoPhillips haven’t figured out that a pipeline to the Lower 48 is a no-go. And what’s worse, neither has President Obama and his administration.

BP and ConocoPhillips are still moving right along with their Denali pipeline. Both Denali and TC Alaska have been granted pre-filing status by FERC. Both are making construction and engineering plans and anticipating the 2010 open season. So what is Larry talking about?

It’s difficult to decipher his reasoning (such as it is). At one moment he asserts that a natural gas bullet line from the North Slope to Southcentral Alaska is essential. I don’t know if anyone has informed him that Gov. Palin agrees that making sure Alaska’s natural gas reaches the in-state market is a top priority.

In the op-ed that Larry is apparently responding to, Gov. Palin stated:

Ensuring that Alaskans have affordable energy for decades to come is one of the most important jobs on my desk right now. To succeed, the state needs to look at every possible option and make sure Alaskans have all the information to make the right decisions.

That’s why I asked the Legislature to fund a thorough review of an in-state pipeline to move natural gas from the North Slope to Fairbanks, through the Railbelt and Southcentral regions, serving as many communities in the state as economically feasible.

She went on to state:

Our effort complements the progress TC Alaska is making on a line to the Lower 48, using its state license under the Alaska Gasline Inducement Act. Alaskans can look forward to all the benefits the AGIA project will produce.

We are not walking away from efforts to promote development of a spur line coming off the “big line” to distribute gas to Alaskans.

And we are not walking away from the long-standing hope that someday a gas liquefaction plant may be built in Valdez to ship Alaska gas to ports all along the world’s Pacific Rim.

We are reviewing all options to ensure Alaskans know all the facts about progress to flow gas to our homes and businesses.

So, Alaska has enough for both. And an in-state bullet line does not negate the construction of a big line to the Lower 48. And a spur line off the big line and a gas liquefaction plant in Valdez are still on the table. Gov. Palin is being pragmatic in moving forward with AGIA and at the same time making sure Alaska is covering in all possible contingencies. No one can predict the future. We can only plan ahead to cover ourselves for all possible outcomes while at the same time pushing forward on the best plan – which is AGIA.

Larry is in love with the LNG out of Valdez option. Surely he’s aware that that is still a possibility with the TC Alaska line. It was part of the planning process. You might say, it’s on the map (click to enlarge): 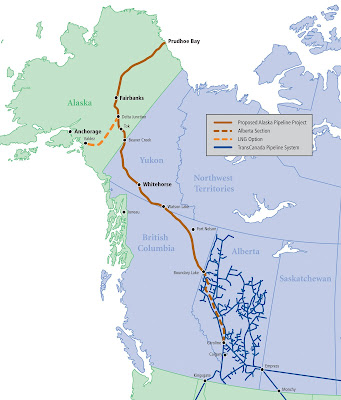 Gov. Palin and her gas line team have repeatedly said that Alaska’s natural gas will be a complement to these other discoveries.

Ben Casselman had an excellent article in the Wall Street Journal last month about the future of natural gas:

A climate-change bill being pushed by President Barack Obama could boost reliance on natural gas. The bill, which could emerge from the House Energy and Commerce Committee in May, is expected to set aggressive targets for reducing emissions of carbon dioxide, the most prevalent man-made greenhouse gas.

Meeting such goals would require quickly moving away from coal-fired power plants, which account for substantial carbon emissions. President Obama wants the U.S. to rely more on renewable energy such as wind and solar power, but those technologies aren’t ready to shoulder more than a fraction of the nation’s energy burden. Advocates for natural gas argue that the fuel, which is cleaner than coal, would be a logical quick fix. In addition, billionaire energy investor T. Boone Pickens has been touting natural gas as an alternative to gasoline and diesel for cars and trucks.

“The availability of natural-gas generation enables us to be much more courageous in charting a transition to a low-carbon economy,” says Jason Grumet, executive director of the National Commission on Energy Policy, who was a senior adviser to President Obama during the campaign.

The growing supply created opportunities for policy makers and environmentalists, who saw natural gas as a possible solution to the nation’s energy problems. Some groups suggested burning more gas and less coal for power generation. Others favor its use in vehicles.

Mr. Pickens has spent millions promoting an energy plan that aims to, among other things, convert thousands of big-rig trucks to run on natural gas. Mr. Pickens has large investments in natural gas and stands to benefit if his plan is adopted. In TV ads, Internet videos and speeches, he emphasizes a different goal: reducing U.S. dependence on foreign oil.

Some environmentalists have embraced Mr. Pickens’s plan as a way to fight climate change. Carl Pope, executive director of the Sierra Club, says he sees natural gas as a “bridge fuel” that could help the U.S. burn less coal and oil until renewable sources of energy are ready to take over.

Not everyone shares Mr. Pickens’s enthusiasm for natural-gas vehicles. Major users of natural gas, such as utilities and chemicals companies, are concerned the plan would drive up prices — an outcome that would benefit producers.

Energy Secretary Steven Chu and some other policy makers have expressed doubts about the practicality of retrofitting hundreds of thousands of service stations to offer natural gas. Some environmental groups, including the Natural Resources Defense Council, have argued that natural gas is better used to replace coal for power generation, and that cars should run on electricity generated by the sun, wind and natural gas.

For cars or power plants — either way it’s the “bridge fuel” to a green renewable future (and such a future is theoretically possible – it really it is – it will just take many decades to get there).

Gas is now cheaper than coal in many parts of the country, leading utilities to burn more gas. Of the 372 power plants expected to be built in the U.S. over the next three years, 206 will be fired by gas and just 31 by coal, according to the Energy Information Administration.

Natural gas is gaining market share far more slowly in transportation. Earlier this year, AT&T announced it would convert up to 20% of its truck fleet to run on natural gas, largely because it has been cheaper than gasoline in recent years. Cities including New York, Los Angeles and Atlanta have converted part of their bus fleets to run on natural gas, for air-quality reasons.

But it’s not just about the environment or the economy. It’s about our security and building a more peaceful world – a world in which America does not fight wars over natural resources:

The natural-gas discoveries come as oil has become harder to find and more expensive to produce. The U.S. is increasingly reliant on supplies imported from the Middle East and other politically unstable regions. In contrast, 98% of the natural gas consumed in the U.S. is produced in North America.

Natural gas is the next big thing. Larry doesn’t seem to see the big picture.

Larry apparently knows more about the energy market than that nutty T. Boone Pickens (you know the guy who always goes broke on predicting the next big thing in energy).

Larry knows more than Sen. Begich and President Obama too. Both of them want a natural gas pipeline from Alaska to the Lower 48:

Begich says he wants President Obama to elevate the line to the national energy agenda instead of treating it as a state project.

Begich says Obama has indicated that a natural gas pipeline is one of the top five projects he wants to move forward.

Begich was using the opportunity to make a dig at the Palin administration, of course. He claims that Obama is “frustrated with the lack of progress on a pipeline.” That’s a very interesting statement considering that the pipeline is right on schedule for the 2010 open season. And not only one pipeline – two! What “lack of progress” is he talking about? No one ever said that the pipeline would be built overnight. I believe the projected finish date is 2018.

Anyone who has sat down and read the AGIA legislation would know that it sets out clear concrete deadlines in order to insure that the project moves forward. It calls for an open season within 36 months of the license signing and has “date certain” requirements for FERC applications. If any of the clear stipulations are not adhered to, then all bets are off and Alaska does not suffer. TransCanada has to deliver.

The Associated Press article about Begich’s remarks contained these two sentences, but provided no explanation or commentary:

Gov. Sarah Palin and legislative leaders awarded a Canadian company, Calgary-based TransCanada Corp., a state license to build a pipeline and with it up to $500 million in incentives.

A company formed by ConocoPhillips and BP PLC is proposing its own pipeline without the incentives.

Can you see what people will take away from those two sentences? Sarah Palin is paying a Canadian company to do what two other companies are willing to do for free. What a moron that Palin lady is!

We’ve discussed many times before why a non-producer owned pipeline is essential.

The 2008 FERC ruling against the owners of the trans-Alaska oil pipeline proved that producer owned pipelines lead to prohibitively high tariffs which squeeze out independent developers and create monopolies that stifle resource development.

In her June 2008 press release about the FERC decision, Gov. Palin noted:

“This decision shows how having a pipeline constructed and operated by the producers can result in inflated tariff rates that cause the State of Alaska significant revenue losses and discourage others who do not own a share of the pipeline from developing the state’s oil and gas resources.”

A non-producer owned pipeline prevents any one single producer from a) keeping the pipeline tariffs (or tolls) prohibitively high, b) unfairly manipulating the scheduling of deliveries, and c) blocking future resource development by refusing to expand to new fields controlled by their competitors. Producer owner pipelines lead to monopolies. AGIA was designed to prevent that.

All of this is to say that AGIA is alive. Very much so. Larry can holler all he wants about it being “dead,” but that doesn’t make it so. Gov. Palin is still plugging away at it. She just tweeted about it last week:

Don’t worry, Larry. The game is not over. AGIA lives!