As the country debates the wisdom of President Obama’s disastrous economic policies, most attention has centered on his enormous stimulus plan which has been unsuccessful at stimulating anything, with the notable exception of the national debt. The stimulus was, of course, doomed to fail from the beginning as was discussed in an earlier post. The media’s focus on Obama’s stimulus has diverted attention from his massive upcoming tax increase on the most productive Americans, which looms ominously over the struggling economy like a guillotine blade about to drop.

Obama has claimed that he’s not raising taxes but rather allowing the Bush tax cuts to “expire”. This, of course, is the kind of illogic we have come to expect from the Obama Administration: simply allowing tax cuts to lapse isn’t really a tax increase even though tax rates will rise. Get it? Although nobody really believes him, depending on the day of the week and with whom you speak in his administration, Obama claims he will only allow this to occur on those making over $250,000.

Let’s assume for our purposes that Obama really means this. How will such an increase in marginal tax rates hurt the economy and, by extension, those of us who aren’t earning over 250k?

First, let’s look at what the top tax rate will be for those productive citizens, mostly small business owners and entrepreneurs, who will be affected. The top nominal federal tax rate for a successful, job-creating entrepreneur is currently 35%. When you add the unlimited 2.9% Medicare tax, this person faces a top marginal tax rate on his federal income of 37.9%. That is to say, each additional dollar he earns is taxed at 37.9%, not including applicable state and local income taxes.

When Obama allows the Bush tax cuts to lapse, the top nominal rate will rise to 39.6%. However, when you add in the 2.9% Medicare tax and the 5.4% healthcare tax Obama is proposing on these same people to help fund his government takeover of the healthcare sector, the top marginal rate increases to 47.9%. This amounts to an effective federal tax increase of 26.4%.

When this large tax increase is foisted upon the economy, the result is predictable. If the economy is growing at the time, it will either grow slower or force the economy into a double dip recession. If the economy is still in recession at the time, recovery will be put off further into the future. Either way, jobs that would have been created won’t be, tax receipts to the government will be less than assumed, and the budget deficit will continue to grow. Why, you ask, would the deficit continue to grow if Obama raises tax rates? The answer lies with the Laffer Curve.

The Laffer Curve’s namesake, economist Arthur Laffer, is said to have first introduced the theory to several important beltway power brokers at a restaurant in Washington DC in the mid 1970s, during which he illustrated his concept by drawing a formulation of the curve on a cocktail napkin. Laffer himself explains the concept in great detail in a 2004 article he wrote for The Heritage Foundation. Robert Sturgeon provides a simpler explanation of the Laffer Curve here. The following excerpt from Sturgeon’s piece is easy to follow:

Now we must put our understanding of human nature to work. We must ask ourselves two questions, the answer to the first being obvious, and the answer to the second being not so obvious, but just as certain. The first question is, “If the income tax rate is zero %, how much income tax revenue will be raised?” The answer is, of course, “None.”

Now, here is where it gets a bit tougher. The second question is, “If the income tax rate is 100%, how much income tax revenue will be raised?” To answer this question, we must place ourselves in the position of an income earner who faces a tax rate of 100% on every extra dollar he earns. Will he have any reason whatsoever to earn any more money? The answer is, “No, he won’t.” He will refrain from any activities likely to result in taxable income. So the income tax revenue from a 100% income tax will be zero, or nearly zero. There will always be a few suckers who go ahead and earn some money, only to have it taxed away. But the number of people willing to do so must be exceedingly small. For all practical purposes, the number is zero.

A graph of the Laffer Curve appears below. 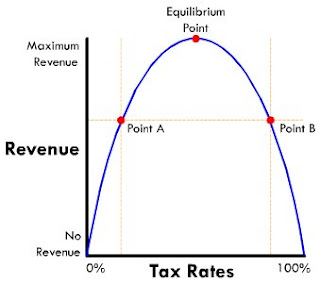 The concept is exceedingly simple. Marginal tax rates are a crucial factor in an entrepreneur’s decision to start a new business or expand an existing one. The marginal tax rate is that rate which applies to the next dollar earned. If the top marginal rate for an economy is at Pt. A, an increase in the rate would generate more revenue for the government. This is due to the fact that the top marginal rate at that point is low enough that a modest increase in said rate is not sufficient to provide a disincentive for an entrepreneur to expand his business.

If, however, the top marginal rate is at point B, beyond the equilibrium point, taxes are already too high and any increase in tax rates will create disincentives for an entrepreneur to expand an existing business or start a new one. In this case, the government will collect more tax revenue by lowering the tax rate.

How will lowering tax rates cause the government to realize more tax revenue?

By lowering marginal tax rates, entrepreneurs have a greater incentive to earn more money and thus, expand their businesses. In expanding production, they hire more workers. These newly hired workers pay income taxes. They also purchase products and services from other businesses who, in turn, increase their production and hire more workers. These workers see their incomes rise, pay more income taxes, and so on. This is called economic growth.

President Obama proposes to increase the top marginal rate on successful entrepreneurs from 37.9% to 47.9%. In other words, he will raise the tax on job creation by 26% from an already high rate. Although economists can’t point with certainty to precisely what tax rate corresponds to the “equilibrium point” on the Laffer Curve above, Obama is undoubtedly beyond it.

Think about it. You are a successful businessman and are considering expanding your business. You see that if you defy the odds and are successful, the federal government alone will confiscate close to half the fruits of your labor. In effect, you have a silent partner who makes it as difficult as possible for you to succeed by placing obstacles in front of you such as rules, regulations, and other impediments. Then, if you do manage to persevere and make a profit, the government will show up on April 15th and shake you down for close to half your income. Why bother?

If, however, the top rate was lower, say, 20%, entrepreneurs would be much more likely to expand their businesses and create jobs. The potential to keep 80% of potential future profits is a powerful incentive to increase production. This is the essence of supply-side economics. Increase incentives to produce and more will be produced. Decrease incentives to produce and less will be produced.

The Laffer Curve is a widely understood concept among economists. Like most good theories, it’s simple. However, despite its simplicity, it is poorly understood by most non-economists. Liberals have a particularly difficult time with the concept. They believe, incredibly, that entrepreneurs will take no evasive action in response to a tax increase.

A couple years ago, I was talking over lunch with a soon to retire history professor. Like most liberal arts professors, he is, well, liberal. Under circumstances I can’t recall, the subject of the Laffer Curve came up. When it did, a normally calm and rational gentleman transformed into a ranting lunatic. I calmly asked him what the problem was. He then launched into a tirade about how the Laffer Curve was, essentially, an evil right wing conspiracy designed to…to…I can’t remember what.

Amused, I asked him to explain the Laffer Curve to me. His disposition immediately changed from maniacal to one of confusion. I politely repeated my question, but to no avail. Finally, in frustration, I grabbed something to write on (it was not a cocktail napkin, as in Laffer’s case) and quickly sketched out the Laffer Curve and explained it to him. He seemed to understand.

When I asked him what part of the theory, specifically, he disagreed with, he changed the subject and muttered something incoherent about President Reagan being wrong when he said “a rising tide lifts all boats”. When I informed him John F. Kennedy, his hero, actually coined that expression when defending his 1963 supply-side tax cut, he mumbled something inaudible and suddenly remembered he was late for a meeting, haircut, fencing match, or something. For more on Kennedy’s views on supply side economics, go here or see video below:

Obama and liberals don’t understand that economics is a social science. Human nature tells us that individuals respond to incentives. If you increase incentives for entrepreneurs to create jobs, they will. However, if you increase barriers to job creation, as Obama’s tax increases will, it should come as no surprise that less jobs will be created.

This is why it is so helpful for economic policy makers to have run a business. Those who have done so know full well how difficult and time consuming such an endeavor is. They understand the nature of incentives. President Obama has never run a business. He has no idea how difficult it is to meet a payroll while satisfying customers, complying with onerous government regulations, and paying confiscatory taxes. Joe Biden, naturally, believes that forcing entrepreneurs to pay more taxes is patriotic.

Governor Palin, on the other hand, has run a business. Like millions of other small business people and entrepreneurs across the country, she intuitively understands that Obama’s tax rate increases will hurt entrepreneurs and make it more difficult to do what they do best: create jobs. In the VP debate, when asked about Obama’s tax increases, she answered thusly:

…when you talk about Barack’s plan to increase taxes only on those making $250,000 a year or more, you’re forgetting millions of small businesses that are going to fit into that category. So they’re going to be the ones paying higher taxes, thus resulting in fewer jobs being created and less productivity.

She also took issue with Joe Biden’s contention that paying taxes is patriotic:

Now you said recently that higher taxes, or asking for higher taxes, or paying higher taxes, is patriotic. In middle class America, which is where Todd and I have been all of our lives, that’s not patriotic. Patriotic is saying, government, you know, you’re not always the solution. In fact, too often you’re the problem so, government, lessen the tax burden on our families and get out of the way, and let the private sector and our families grow and thrive and prosper.

I’m not clairvoyant. But if I was, I have a feeling President Kennedy would be far more likely to follow Governor Palin’s (as well as President Reagan’s) policy prescriptions to get the economy moving than those advocated by President Obama. You can’t borrow your way out of debt, spend your way out of recession, or tax your way to prosperity.

(Note: I did not include state and local income taxes in my discussion. These taxes only add to the obstacles entrepreneurs face in expanding production and creating jobs. For example, in New York, America’s largest city, the state’s top marginal income tax rate is 8.97%. The top New York City tax rate is 3.648%. Therefore, the top marginal rate a New York City entrepreneur will face if Obama prevails is a staggering 60.518% [47.9 + 8.97 + 3.648].