As Sinistar already posted, we have the chance to help support one of Governor Palin’s “mama grizzlies”. Governor Palin tweeted the following this afternoon:

Ellmers is in need of support as her opponent, Congressman Etheridge, is calling for a recount despite Ellmers’ 1600 vote lead. Ellmers’ campaign will need to hire lawyers to ensure that the recount process is performed with integrity. You may remember that her opponent, Congressman Etheridge, is the man who assaulted a college student this summer who asked him a simple question about his support for President Obama’s agenda: 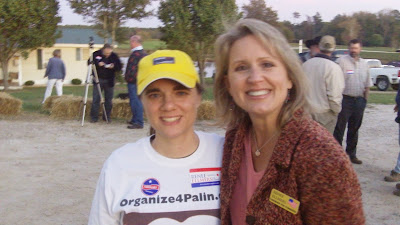 Ellmers is one of Governor Palin’s mama grizzly candidates who is a citizen-politician who became engaged in the political process through townhall meetings in 2009 and decided to run in 2010. Governor Palin has also challenged the Beltway GOP to support Ellmers in this fight:

SarahPAC help is on the way for @Renee4Congress recount fund. Will other PACs join us? How about Beltway GOP? http://is.gd/gIZKN

The GOP machine has yet to support her, as Ellmers shares on her website:

Yesterday, we appealed to the National Republican Congressional Committee for support, asking if they could contribute to help pay the costs of this recount. Their answer, unfortunately, was, No – that we would have to raise the money to pay for the recount ourselves.

I was afraid that would be their answer. Months ago, I went to Washington and asked the National Republican Congressional Committee and many conservative leaders to help my campaign. Many conservative groups – like the Susan B. Anthony List, Concerned Women of America, Freedom Works, and Sarah Palin’s Sarah PAC all helped, but the NRCC declined. Later, they did support other campaigns in North Carolina – which, unfortunately, lost – but we never received their support. In fact, their spokesman told the press “that the campaign wasn’t ready for prime time” – which actually made it even harder for us to raise money. So, I am doubtful we will get support from the NRCC to help with the expense of the recount.

Ellmers is seeking to do what Governor Palin has done throughout her political career–take on the Left without the full support of her own party. If you can, please support Ellmers’ campaign by donating here.

Update by Doug: (h/t CB) Dan Riehl takes the NRCC to task for their misplaced priorities and general incompetence here. Conservatives had a fantastic day on Tuesday, but establishment entities like the NRCC had little, if anything, to do with it.