Refugees from the 1970s doubtlessly recall the daily parade of bad economic news to which they were treated each evening by the Big Three television networks (back then, due to a lack of competition, they actually had viewers). This period of time was characterized by a stagnant economy, high unemployment and interest rates, double digit inflation and, as Jimmy Carter himself put it, a general sense of malaise. In addition to the dismal economic statistics, Americans became familiar with such terms as “monetization”, “rationing”, “stagflation” and the “misery index” while enduring fashion disasters such as the leisure suit and Gerald Ford’s WIN (whip inflation now) buttons. 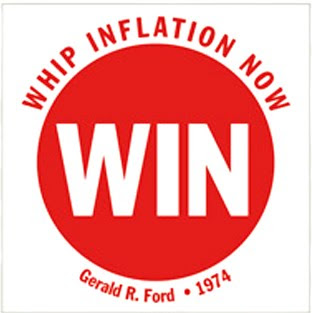 They (whoever “they” are ) say history repeats itself and, given the latest news that the Fed plans to buy another $600 billion to perhaps as much as $1 trillion in government securities, they may be right. While I don’t foresee a return of the leisure suit, Americans may once again become familiar with the other terms and economic conditions to which I referred above that were a part of the daily lexicon in the 1970s. With this decision to expand the money supply by up to another $1 trillion, Ben Bernanke seems to be channeling his inner Arthur Burns.

Arthur Burns, of course, was Fed chairman from 1970 to 1978 and his accommodative monetary policy is generally believed to have been at least partially responsible along with, to a much smaller and greatly exaggerated extent, oil supply shocks, for the rampant inflation that characterized that decade. Burns, a Keynesian, subscribed to the view that the Fed should pump up the money supply in order to provide cover for the bad fiscal policy which emanated from the Nixon, Ford, and Carter Adminstrations during his chairmanship.

The results were disastrous: the consequent high inflation and interest rates coupled with little or no economic growth and high unemployment resulted in essentially a lost decade. Economist Robert Barro coined the term “misery index” (the inflation rate plus the unemployment rate) to describe the pain Americans were feeling. Under Keynesian theory, simultaneously high unemployment and inflation was not supposed to happen. High inflation should only occur during periods of rapid economic growth and the resulting tight labor market. And yet in the 1970s unprecedented inflation accompanied a slow economy and high rate unemployment rate. This combination of a stagnant economy and inflation is known as “stagflation”, and is the one word that best describes economic conditions during the 1970s.

Stagflation, of course, is not a good thing, but with the announcement of the Fed’s ill-conceived plan to expand the money supply by as much as a $trillion, Bernanke seems intent on following Burns down this path. Monetizing the debt, and make so mistake, that’s what QE2 is all about, must result in inflation sooner or later. You can’t add a trillion dollars to the money supply without a corrseponding increase in production and avoid it. This is a classic example of “too many dollars chasing too few goods“. The government hopes to pay off the enormous debt they are incurring with inflated (cheaper) dollars in the future. Those who hold those shrinking dollars are not happy to see their investment devalued, nor should they be. And once inflation ticks up, interest rates must rise as well as lenders will have to build inflation into their expected real returns. Both Governor Palin and Paul Ryan made many of these points yesterday.

The Fed should concentrate on maintaining a stable dollar, not weakening it. There are those short-sighted policy makers who believe we should welcome a cheap dollar since it will result in cheaper U.S. exports abroad, as if this is some kind of economic panacea. It’s not. Indeed there is plenty of empirical data to suggest it doesn’t even work. Economist Mark W. Hendrickson of Grove City College notes that a dramatic weakening of the dollar vis-a-vis the Yen and Yuan didn’t improve the U.S. balance of trade between America and either of the two Asian economic powers:

Nearly 40 years ago, the exchange rate for the Japanese yen was over 300 to a single dollar. Japan was running a large trade surplus with the United States. Some experts believed that the way to shrink the Japanese surplus (i.e., the U.S. trade deficit) was for the yen to appreciate.

Fast forward to the 1990s. The exchange rate was about 90 yen to the dollar. In other words, the yen bought more than three times as many dollars as before. And guess what? The U.S. trade deficit with Japan hardly budged.

In fact, Japan derived some considerable benefits from the stronger yen. For example, since the global market for oil is priced in dollars, the real cost of higher oil prices to the Japanese has been only about 1/3 of ours. Advantage, Japan.

Just as other factors outweighed the impact of the currency exchange rate in the trade balance between Japan and the United States, this has also been the case in recent years with China. Between July 2005 and July 2008, the yuan strengthened 21 percent against the dollar, and yet the annual trade deficit rose from $202 billion to $268 billion.

As Hendrickson and many other economists have noted, the weak dollar may be a temporary boon for a few U.S. exporters, but it hurts far more Americans than it helps. A few American businesses rely on exports, all Americans rely on imports. Think about this intuitively: would you prefer your dollar to buy more stuff or less stuff? A strong dollar allows us to buy more goods and services, a weak dollar less. It’s really that simple. By printing money, the Fed is weakening the dollar and forcing Americans to either lower their standard of living, or pay more to maintain it at current levels.

The world economy continues to integrate, and U.S. businesses and households, indeed the entire U.S. economy is at least as dependent on imports as on exports. There is nothing wrong with an integrated world economy, as it results in a more efficient allocation of worldwide resources and higher living standards. The Fed’s move will disrupt these efficiencies, and many U.S. businesses will see higher production costs as the weakening dollar results in steadily rising input costs, which they will pass along to consumers. Crude oil is the most visible example, as it reached a 2-year high today, and is expected to reach $90 per barrel any day now.

Continuing to devalue the nation’s currency through monetization will not only result in dramatically higher energy prices, but higher prices for practically everything else as well. As Milton Friedman famously said, “inflation is always and everywhere a monetary phenomenon”, and it’s never good for the economy. Did it help in the 1970s? The answer is obvious, but if Washington policymakers continue down this inflationary path, we’re going to learn the same painful lesson all over again. Governor Palin is absolutely correct in her admonition to the Fed to “cease and desist” with this plan.

We shouldn’t be playing around with inflation. It’s not for nothing Reagan called it “as violent as a mugger, as frightening as an armed robber, and as deadly as a hit man.” The Fed’s pump priming addiction has got our small businesses running scared, and our allies worried. The German finance minister called the Fed’s proposals “clueless.” When Germany, a country that knows a thing or two about the dangers of inflation, warns us to think again, maybe it’s time for Chairman Bernanke to cease and desist. We don’t want temporary, artificial economic growth bought at the expense of permanently higher inflation which will erode the value of our incomes and our savings. We want a stable dollar combined with real economic reform. It’s the only way we can get our economy back on the right track.

Like Ronald Reagan, Governor Palin understands that a strong and stable currency is a prerequisite to a dynamic economy, and that the fed should concentrate on monetary stability, not mucking around with the money supply in a quest for a little temporary (and illusory) economic growth. Even Bill Clinton understood this. The fact that today’s policy makers in Washington don’t understand something so basic is alarming, and does not bode well for the future. Obama has burdened the American economy with enough economic problems. Why add 1970s-style stagflation to the mix? I agree with Larry Kudlow: QE2 should be left at the dock. As noted in a previous post, Governor palin will be discussing this very topic during her keynote address to the STAFDA Annual Convention in Phoenix today.

Update: Here are two videos, Part I and Part II, in which Milton Friedman brilliantly (and clearly) explains how bad monetary policy is always the root cause of inflation. It’s well worth your time to watch. As you do so, consider what Bernanke is about to do with QE2: