Can a Supposedly Unbiased Softball Interview Television Special Possibly have a Biased Agenda?

Apparently so when it involves Governor Palin.
On Thursday night was Barbara Walters yearly special The 10 Most Fascinating People on ABC. For the third year in a row, Governor Palin was one of the ten people profiled on the special. We posted the interview here last night.

When I watched it live, I didn’t think much of it, but after re-watching it a couple of times yesterday I was struck by the apparent large amount of editing that was done to the pre-taped interview (it was conducted last month when Governor Palin was in New York for FOX News election night coverage). I also remembered these two tweets from Ram later that night after the show aired:

Then yesterday, John Ziegler had an interesting story in the Daily Caller which pretty much backed up my suspicions and shows how the mainstream media always seems to ever so subtly try and show Governor Palin in a negative light even in supposedly unbiased softball interviews. Ziegler writes (emphasis mine):

During the very short portion of Walters’ interview with Sarah Palin that was shown to the public, Walters managed to refer to Palin as “scary,” “polarizing,” and “uniformed” (twice). She also regurgitated the “what do you read?” question, blamed Palin for Republicans not taking the Senate (wait, I thought the media would make someone a hero if they thought they saved the Senate for Democrats!), and questioned the validity of her marriage. All of this happened on a special where the toughest question is generally “whom are you dating?” and coming right behind an entire hour where Oprah wasn’t asked about any of the numerous scandals from her twenty-five-year career.

OK, so ABC and Barbara Walters are biased against Sarah Palin. Obviously this is not news. However, what should be “news” is that Walters would have the audacity to twice refer to Palin as “uniformed.” This was outrageous not just because Walters didn’t even attempt to give an actual example of Palin being “uninformed,” but also because Walters herself has proven to be comically “uniformed” when it comes to alleged Palin transgressions.

When I was promoting the first release of my documentary film, “Media Malpractice… How Obama Got Elected and Palin Was Targeted,” and after Walters nearly put her shaking finger through my chest while we debated on “The View,” I did Walters’ radio show and was shocked when Walters revealed that she was likely one of the many Obama voters who was under the delusion that Palin had told Charlie Gibson, “I can see Russia from my house,” rather than what Palin had actually said which was the very different, “You can actually see Russia from land here in Alaska.”

To be fair there were some good parts in the interview which showed Governor Palin in a positive light, for example when The First Dude husband Todd joined them to talk about their life together and wonderful marriage and family. However, we don’t know and will probably never know how much positive content of the interview was left on the cutting floor.

Update: Well maybe we do… late yesterday afternoon on his radio show, Mark Levin had this to say about what Governor Palin reads. Via The Right Scoop:

So I guess ABC and Walters don’t want the public to know that Governor Palin reads one of most informative and best selling conservative books written in the last 2 years? By the way, C4P readers may remember this photo taken of Governor Palin in 2009: 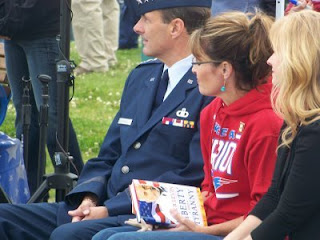 (h/t Adrienne)
Yes, this Unbiased Softball Interview Television Special had no biased agenda to show that Governor Palin is “uninformed” or hide that she reads certain books. I would hope after 2+ years of debunking this ridiculous narrative the public will finally realize Governor Palin is VERY informed and reads many kinds of books and publications. Again, it’s also interesting to note to the viewers of this Unbiased Softball Interview Television Special that the host of the show that has years of experience as a so called journalist is the one “uninformed” about Governor Palin.