Question: What do you get when you put 104 Republican Party hacks in a room and conduct a meaningless straw poll? Answer: This.

Former Massachusetts Gov. Mitt Romney continues to be seen as the favorite for the 2012 Republican presidential nomination according to a special National Journal Political Insiders Poll released on Tuesday. The second favorite for the GOP nod is former Minnesota Gov. Tim Pawlenty. But Sarah Palin, the former Alaska governor who was John McCain’s running mate in 2008 and was once viewed as a potential party standard bearer, was ranked ninth by the GOP Insiders—tied with former Florida Gov. Jeb Bush and Texas Gov. Rick Perry—when they were asked who was most likely going to be their 2012 presidential nominee. 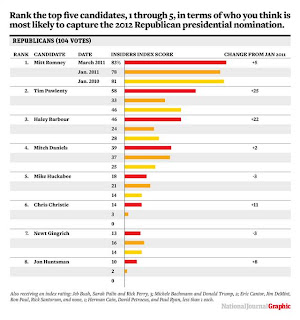 Why even have a primary? The self-anointed 104 have spoken. And these guys really know what they’re talking about, right? They are, after all, the same sages who told us after the 2008 election that conservatives’ return to power was contingent upon our coming to terms with the “inner-Democrat” that lies within us. Or something. I guess they must have missed that Tea Party thingy. Aren’t they also the same folks who told us Rudy Giuliani was the inevitable Republican nominee as late as early 2008? And let’s not forget that the predecessors to these beltway geniuses told us that Reagan couldn’t beat Carter. In March of that year, after Reagan had effectively clinched the nomination, we heard this from that infamous species of Republican, the anonymous party operative:

Some party operatives are plainly unhappy with his selection. In Massachusetts, where both Bush and Anderson defeated Reagan, party leaders are not yet reconciled to the Reagan candidacy. Says one: “There’s a vacuum of leadership at the national level; and what appears to be the Republican Party’s response? A 69-year-old man who has done virtually nothing for years. We’re at the same stage the Whigs were.”

Er…excuse me? The nomination of Reagan was going to result in the extinction of the Republican Party? How’d that prediction work out? Is it possible for a political prognosticator to be more wrong? I think not, and it’s quite revealing to see that today’s Republican experts are as clueless with regard to Governor Palin as their beltway forebears were when it came to Ronald Reagan. This is not surprising, of course, since these are the same people who praise Reagan effusively in public while having spent the past twenty-four years pushing Democrat-lite candidates and policies that actually did push the Republican Party to the brink in 2008.

Governor Palin and the Tea Party movement rescued the moribund GOP in 2009 by standing for something, and that something wasn’t the squishy agenda of moderation these Republican insiders have long advocated. For the first time since Reagan (other than a brief flirtation in 1994), the Republican Party once again became the party of ideas. Unapologetic conservative ideas. There was little beltway dissembling or equivocation in 2010, just an energetic and relentless espousal of conservative principles. And what happened when we eschewed the advice of political insiders and returned to our conservative roots? We won. Big time. And Governor Palin led the charge. She was the MVP of that election.

And yet these brilliant beltway insiders know better. In their minds, Republicans need to nominate a plastic flip-flopping parody to go up against Obama in 2012. He can’t win, and neither can any of the other usual suspects they are promoting. All of these candidates are deeply flawed, and to nominate any of them is akin to unilateral disarmament on the part of Republicans, a point I made in a recent post. How can Republicans, for example, criticize Obama for Obamacare when their candidate’s own plan served as a blueprint for the program? And Mitt’s not the only one on their list who can’t credibly raise this issue. George Will’s favorite candidate, Mitch Daniels, also has an Obamacare problem. Michael F. Cannon at National Review has details here and here. And Jon Huntsman? Ditto.  And energy?  Does anyone seriously believe that won’t be a salient issue, perhaps the salient issue, in 2012?  How do those on the insider list stack up on that issue?  Not so good:

Mitch Daniels is for an oil import tax.  Though he claims to have pulled a Mitt Romney on carbon emissions, Tim Pawlenty signed cap and tax legislation just over three years ago. Jon Huntsman thinks cap and tax is a fantastic idea.  In 2005, Mitt Romney claimed cap and tax was “good for business“.  Now he’s against it (of course). Well, sort of.  I now know why his fans call him a turnaround artist.  It does sound better than flip-flopper, after all.

To put it simply, the only way to defeat Obama is to nominate a candidate who can credibly and authentically go after him on his unpopular policies.  These guys can’t.  Seriously, then, given that these characters have no chance of beating Obama, why all the love from the beltway class?  It’s really quite simple.  Money.  These beltway candidates have (or will have) lots of it and, most importantly, will be more than willing to give an enormous quantity to these keepers of the beltway status quo.  Keep in mind, a consultant’s favorite politician is a needy one.  Nothing is better for the financial well-being of a political insider than a politician who thinks he needs, and is willing to pay handsomely for, advice on everything including what to think, how to dress, what to say, when to say it, what to eat, and, in Romnney’s case, what coiffure will allow the Mittster to emit a youthful and vigorous vibe while at the same time allow him to project a sense of gravitas and competence.

The ever malleable and cash-laden Mitt is perfect for them, and that’s why he tops their list.  Unfortunately for them, though, Governor Palin knows who she is and can get along just fine without their services. If she wins the nomination, which she will if she runs, most of these parasites will be unemployed.    And that, far more than trivialities such as Obama’s ruination of the country, is what motivates them.  Sure, they’ll be able to talk some down-ballot candidates into paying for their lame advice, but the big money is at the presidential level, and they can’t afford to miss out.