Governor Palin Connects with Even Her Detractors

The first person who approached Palin outside the restaurant was Diane Barone, a union activist from Youngstown, Ohio in town for IUE-CWA contract negotiations. She shook Palin’s hand and would not let go, telling the former governor she disagreed with her positions on unions. Palin responded calmly that her father had been a union member and that making things better for working people “is something on which we can agree.” She said afterwards that she doubted she could change Palin’s mind, but you never know: “I thought she would ignore me and she did not, she shook my hand.”

Governor Palin has, of course, expressed support for unions and working class people, most recently in prefacing her April speech in Madison, Wisconsin by stating her support for Governor Walker’s plan was because it provided solvency for union pension programs and saved their jobs. Many working class people have reciprocated support for Governor Palin in return. Beyond this, however, this interaction shows Governor Palin’s willingness and ease in connecting with everyday Americans–whether they agree with her or not–and it re-iterates the assertion that she made yesterday in her interviews with CNN and Real Clear Politics about her role as an atypical politician and some of the interactions those reports picked up from Governor Palin’s stop in Pennsylvania yesterday:

Her political skills were on display Tuesday during a bus tour stop in the central Pennsylvania hamlet of Dillsburg, where Palin breezed into a coffee shop and happily sat down with two locals.With a common touch that sometimes seems to elude several of her potential rivals for the Republican nomination, Palin got the two men to open up about their personal lives before veering into a conversation about the sluggish economy.

“That’s how you learn and grow and figure out what the needs and concerns are so that you can know what to concentrate on to help meet those needs,” she continued. “So yeah, if someone was to lose that, you become a typical politician. And that’s pretty tragic, in my eyes.” 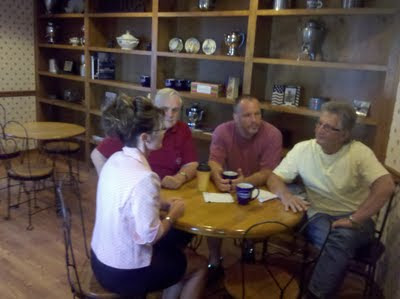 The Daily Beast also noted Governor Palin’s willingness to engage those who oppose her politics following her dinner with Donald Trump:

On the sidewalk, dozens of people surrounded the former governor, many taking cellphone photos. Two yelled, “Obama!” Another urged her to run for president.

One woman, Janet Bernard, who described herself as a “union worker” and “diehard Democrat,” told Palin she thought Republicans only wanted to help people “with money” and not “working people.”Palin handled the challenge with aplomb: “We have to make it about working people.” Bernard, who seemed satisfied, wished Palin “all the best.”

Governor Palin is a skilled retail politician, but for her it’s genuine. It’s not about campaigning in the traditional sense of pandering and saying what people want to hear, but it’s about listening and being open to dissenting opinions. For Governor Palin, this is not only how she operates a potential pre-campaign bus tour. It’s about how she governs as a politician as well. Over two years ago, to the the disappointment and frustration of some Alaskans, Governor Palin rejected federal stimulus dollars for some educational and arts programs. Rather than huddling down in her office and ignore those who protested the her decision, she went out in the cold sans a coat and talked with her protesting constituents. The woman who organized the protest even conceded that Governor Palin was very open to a dialogue, expressed honestly her reasoning for rejecting the funds, and encouraged the protesters to remain engaged with their legislators on the matter of those funds:

As Governor Palin mentioned, she feels that the most valuable thing a politician can have is a one-on-one connection with a voter or constituent. Governor Palin often states, as well, that politicians must walk the walk, not just talk the talk. By all accounts, these interactions, both yesterday and two years ago, show that she indeed walks the walk.