Ground Report From The Undefeated in Grapevine (Video Included)

O4P volunteer and blogger Jelayne Sessler of the Palin Defender blog has submitted this excellent visual and written round-up from her experience last Friday night at the sold-out debut of The Undefeated in Grapevine, Texas.

We encourage and appreciate this kind of grassroots effort to promote the film and show the extent of Governor Palin’s enthusiastic support. (Plus I just LOVE the rabbit ears t-shirt with Gov. Palin and President Obama.) Keep the submissions coming! Send your reports here. 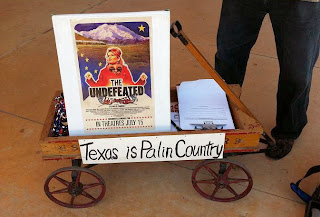 This past weekend was time well spent.

Myself, among other Organize4Palin volunteers stood outside the AMC Grapevine Mills theater, which was 1 out of the 10 theaters premiering “The Undefeated”—a documentary about superwoman—I mean Sarah Palin.

It was a pleasure, for the very first time, to shake the hands of many of my fellow Facebook Patriots that I regularly speak with via the worldwide web.

There is something especially unique about Sarah Palin supporters. Not only are they energized, optimistic, confident and patriotic, but when you meet a Palin Patriot you immediately feel as if you are kindred spirits—almost like family.

We all presently carry a heavy burden on our shoulders in regards to the state of our union. And what does a family do during times of trouble? They huddle together, comfort one another and devise a plan not only endure but emerge victorious.

Here are some pictures of my “family”: 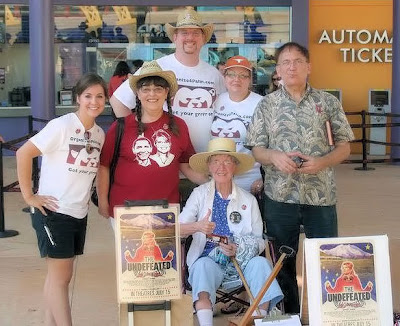 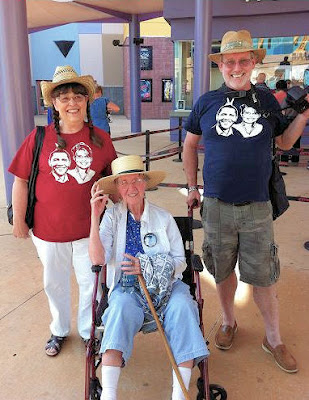 Such a pleasure to meet my fellow writer, Mark America: 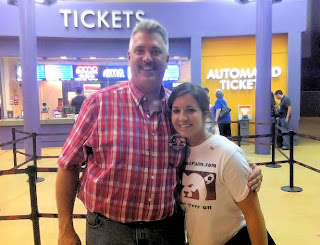 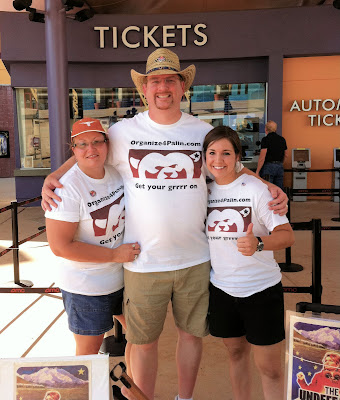 After promoting the film outside, we headed inside to view the film.

The theater was packed, and for the second time it was necessary for me to sit near the very front of the theater. Don’t get me wrong, I’m not complaining—just trying to give you an idea just how much of a success this film has been opening weekend.

When I walked into the theater, I grabbed a seat next to a stranger. I had a handful of “Sarah Palin for President” bumper stickers so I decided to offer one to the lady next to me. She graciously accepted, thanked me and went on to ask, “Was that you I read about in today’s newspaper?” I replied with, “Yes ma’am, me and a few other volunteers.”

The lights dimmed as my response concluded.The film opened with atrocious commentary from various media outlets. Truthfully, it hurt my heart to sit and watch. There was also a snapshot of an appalling 2008 Halloween decoration of Sarah Palin being hanged with a noose around her neck. Again, my heart ached.

Like every new day we’re given, there is always darkness before light. The film progressed and my heart filled with American pride.

The closing of the film showcased Sarah Palin in Madison, Wisconsin where she gave a tremendous speech that concluded with: “Mr. President, GAME ON!”

That statement, was accompanied with more thunderous applause and shout-outs such as, “Run Sarah, Run!”

The credits rolled on and I asked the lady next to me if she enjoyed the film. Tears filled her eyes as she shook her head to reply “yes.”

As I expressed how glad I was that she enjoyed the film, she sobbingly tried to explain to me: “The Tea Party and Sarah Palin remind me of the Reagan Revolution. I was your age during that time and you remind me of me. Thank you so much for all that you do.”

It’s difficult for me to watch someone cry without giving them a big hug, so I offered a hug and she held me tight for a minute.

Many wonderful memories were made this past weekend. There is truly nothing like being in a room filled with like-minded American Patriots.

Here are a few video comments I recorded after the film:

I'm a mother of three, and devoted Palin blogger.