More hope and change in the Age of Obama. The Bureau of Economic Analysis (BEA) released their advance estimate of 2nd quarter U.S. economic growth today.  Via CNBC:

The U.S. economy grew less than expected in the second quarter as consumer spending barely rose, and growth braked sharply in the prior quarter, a government report showed on Friday.

Growth in gross domestic product—a measure of all goods and services produced within U.S. borders—rose at a 1.3 percent annual rate, the Commerce Department said.

Also noteworthy, the BEA the significantly revised their growth estimates down for the 4th quarter of 2010 and the first quarter of 2011:

First-quarter output was sharply revised down to a 0.4 percent pace from 1.9 percent.

In addition, fourth-quarter growth was revised down to a 2.3 percent pace from 3.1 percent, indicating that the economy had already started slowing before the high gasoline prices and supply chain disruptions from Japan hit.

While the BEA always revises their estimates as time passes and more complete data is compiled and assessed, these revisions are nevertheless startling.  Essentially the economy is at a standstill.  Pathetic GDP numbers like these will do nothing to improve the employment outlook, as sustained growth rates in the neighborhood of 2.5 – 3% are necessary just for the economy to tread water in terms of the unemployment rate when you factor in the demographic realities of a growing labor force.  Higher sustained growth rates than that are required for the unemployment rate to come down.

Governor Palin has often noted that we know what to do to grow the economy and restore jobs, and President Reagan provides the blueprint.  Obama, of course, blames everything on Bush and still tries to claim that he inherited a bad economy.  Fair enough on the later: He did inherit a bad economy.  However, it was certainly no worse than the mess Reagan inherited from Jimmy Carter.  Indeed by any objective measure, what Reagan began with was far worse as the following chart, produced by Mark Perry of the American Enterprise Institute, makes clear: 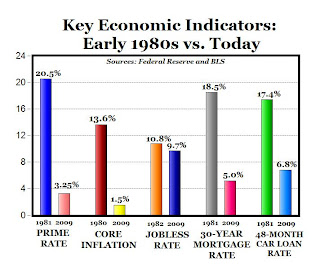 See if you can spot the differences.  There are several points of interest for me.  First, Reagan really did have a deeper hole to dig out from, as Mark Perry’s chart above demonstrates.  Second, the Reagan tax cuts were quite a bit more effective at producing economic growth than Obama’s hopey changey Porkulus and Obamacare boondoggles.  (Yes, in addition to his claim that Obamacare was a deficit reduction program, Obama also claimed it was essential to repairing the economy or something.)   Third, despite Obama’s asinine claim that Obamacare was a “jobs program” and a key to lowering the unemployment rate (don’t tell these guys), it turns out the the real key to lowering the unemployment rate is a growing economy.  Who knew?

Reagan certainly did, and that’s why the differences between the Reagan Recovery and the Obama Recovery are so stark.  Governor Palin also knows, and that’s why she has frequently said, paraphrasing, that though the solutions may be difficult, they’re also remarkably simple, provided we have a leader with the common sense and experience to follow the time-tested solutions Reagan did.  In 2013, the next president will inherit a Jimmy Carter like mess…or worse.  The good news is that we know how to fix it, and Governor Palin has consistently demonstrated that she understands this better than any candidate or potential candidate out there.  So, in the meantime, as Obama’s poll numbers continue to sink to Carteresque levels , it may be useful to to familiarize yourself with some of the quaint, 1970s era vernacular like “economic malaise” and “misery index”.  It can’t hurt and could even be a valuable conversation starter at a party.  Who knows.

Update: (h/t TT) A superb piece from James Sherk at the Heritage Foundation illustrates just how much a drag on hiring and the overall economy Obamacare is.  You really need to read the entire artical but here are a couple key quotes:

Within two months of the passage of Obamacare, the job market stopped improving. This suggests that businesses are not exaggerating when they tell pollsters that the new health care law is holding back hiring. The law significantly raises business costs and creates considerable uncertainty about the future. To encourage hiring, Congress should repeal Obamacare.

The economy is experiencing an unusually slow recovery. While the labor market improved steadily from January 2009 to April 2010, it suddenly stalled in May. This coincided with the passage of President Obama’s health care overhaul, which significantly raised both the costs and uncertainty involved for businesses providing employer-sponsored health insurance. Many businesses report that this legislation is holding back hiring. The data suggest that these complaints are not idle.

Read the rest of Sherk’s analysis here. To be sure, Obamacare is just a part of the reason the Obama economy is in shambles, but a big part nevertheless. I can’t help but wonder if Obama still thinks of Obamacare as a jobs program.  Given his economic illiteracy, I’d have to conclude he does.