Romney vs. Palin: Delusions of Grandeur vs. Authenticity

I feel for Mitt Romney.  It must be very difficult for a man who has nothing in common with anyone outside of the Boston-New York-DC Establishment to connect with us rubes in fly-over country.  But he’s trying.  Or at least his army of paid advisors are.   They’re doing all they can to accomplish the impossible task of transforming Mitt from a plastic, flip-flopping panderer with no core values (other than a desire to be President) into what he’ll never be: authentic.   It is them I really feel sorry for.  Well, maybe not.  I’m sure Mitt’s compensating them quite handsomely, after all.

But still, their job is an unenviable one.   Team Mitt has spent years and thousands of man-hours carefully crafting Mitt’s latest makeover.  Call it Mitt Romney version 6.0, complete with skinny jeans.  One of the key components of the makeover, brilliantly embedded in a speech, was to cement his street cred by claiming that he shops at Walmart.  And, recognizing a good idea when they see it, Romney’s consultants prevailed upon him to copy Scott Brown’s pickup truck idea and drive one of his own to a campaign event.  Further, in order to secure what Team Mitt undoubtedly thinks of as the “Bubba vote”, they had Mitt claim to be a lifelong hunter or something.   They even provided this picture to prove it: 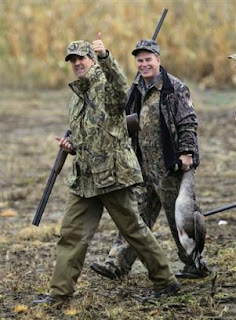 Oh wait…silly me.  That’s the Democrat version of Mitt Romney.  My mistake.  The Republican version has actually only been hunting twice.  I guess, though, that if those two times were appropriately spaced out, his claim to be a lifelong hunter is technically correct, right?  I’ve been to New York City twice so, obviously, that makes me a New Yorker.  Problem solved.  Score another one for Mitt’s consultants.  One of his consultant’s best scores, however, has to be this hilariously staged picture Mitt tweeted of himself last Thanksgiving in which he was doing dishes, presumably for the entire Romney clan (including the paid kitchen staff), at his Wolfeboro, New Hampshire mansion on Lake Winnipesaukee: 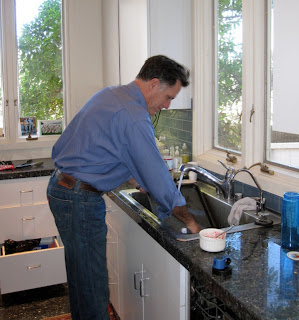 They even managed to get the skinny jeans in the picture, heh. But alas, my friends, much of this hard work undertaken by Mitt’s consultants has been jeopardized.  The “man of the people” persona, carefully crafted by his enormous staff, has been dealt a bit of a setback.  The real Mitt Romney has surfaced. It seems the Mittster doesn’t particularly like mingling with, or even being near, ordinary people — or their children — and goes to extraordinary lengths to preclude that from happening.  Via Glen Johnson at the Boston Globe:

The former Massachusetts governor is basing his 2012 Republican presidential campaign in rented space at 585 Commercial St., the former Roche Bobois showroom that also served as his 2008 campaign headquarters.

Yet between the two campaigns, its parking lot has become a favorite drop-off spot for the parents of North End children participating in a summer tennis and literacy program held on a tennis court on the other side of the lot.

The Romney campaign has responded by placing security guards and a barricade across the parking lot entrance, forcing the parents to use a turning lane on a public street for their drop-off. They are not happy about the change.

“It’s a very unsafe situation for the children and a very unneighborly, unkind thing for the Romney campaign to be doing,” one wrote today on the website “Universal Hub,” which first reported about the controversy.

When questioned on this rather unneighborly behavior Team Mitt, as is their custom, blamed it on someone else:

The Romney camp initially told the Globe that it wasn’t enforcing the ban, and that a resolution was the responsibility of building management.

It also explained that the lot was used by “other tenants,” and it occupied only about half of the parking lot spaces. The others were reserved for the Zipcar auto rental service, the campaign explained.

“We are aware of the issue and are hopeful that the building management company can reach an accommodation with the organizers of the tennis program at the adjacent court,” said spokeswoman Andrea Saul.

Of course.  It’s not really Team Mitt’s fault, you see.  It’s that evil building management company that’s at fault for endangering the kid’s safety, and the two rather large henchmen, pictured above the fold, blocking the parking lot have no ties whatsoever to the Romney campaign.  Except they do:

Yet little more than an hour later, the Romney campaign changed its story.

It acknowledged that the two guards are employees of a private security firm hired by the Romney staff to secure the building.

In effect, the campaign acknowledged, it was banning the parents from using the lot as a  drop-off point, as the parents complained, not the building management, as it first explained.

Oops.  Another flip-flop from Team Mitt? I guess Mitt Romney, man of the people and all around regular guy, isn’t all that comfortable being near…people.  Perhaps I’m being too harsh, though.  I suppose it’s possible Mitt’s taking precautions against the possibility that those kids are secretly working for a rival campaign and, hence, under instructions to break into Mitt’s headquarters and steal his campaign secrets, a modern day CREEP if you will.  Or maybe this is just an isolated event for Mitt and not indicative at all of his normal behavior.  But then again, maybe it is:

While governor from 2003 to 2007, he came and went from his State House office via a public elevator that was locked for his personal use. Aides also erected velvet rope barriers outside the office, and at his news conferences and public appearances.

Several of his former aides were known to sport Secret Service-style earpieces, lapel pins, and identification that resembled a law enforcement badge.

One resigned from Romney’s first campaign in June 2007 after he was accused of impersonating an officer in New Hampshire and Massachusetts.

So, essentially, Mitt hires people to dress like secret service agents, complete with earpieces and lapel pins (dark sunglasses and throat mics are implied) to make him feel important.  Really important.  Now we know one of the reasons he’s been running for president since about 2002: He’ll get real secret service guys.  Heh!  I thought it might be interesting to contrast the Mittster’s paranoid behavior with that of Governor Palin. When she agrred to attend the premeire of The Undefeated in Iowa, Steve Bannon, the film’s producer, hired a firm to provide security for her and her family, via Peter Boyer at Newsweek:

Bannon also obtained the services of Craft International, a high-end security firm, which dispatched to the scene a four-man team: three former Navy SEALs and a former member of British special operations.

Three former Navy SEALs a member of British special ops.  Very impressive. Mitt would have been in security paradise.  Who knows…maybe one of the SEALs would have let Mitt wear his earpiece and throat mic.  As an added bonus, the Mittster could have given his regular henchmen the night off and saved that money to hire more campaign consultants.  Governor Palin, on the other hand, was her usual unpretentious self and, evidently, would have been perfectly happy to lend the security team to Romney to assuage his paranoia:

They arrived the day before the event and were instructed to repair that night to the local airfield, where the Palins were to arrive by private plane. The night passed, but the Palins didn’t arrive. The team learned the next day that the couple had gone to Minneapolis, to help Bristol get settled in for the start of her book tour at the Mall of America.

The next morning—the day of the event—Bannon and his security team learned, via Twitter, that the Palins had spent the night in Des Moines. (“Our hotel was right down the block from The Des Moines Register,” Palin later told me, plainly pleased. “Nobody knew we were there.”) After Sarah’s morning run by the river, they were driving to Pella.

On the fly, a new security plan was conceived: the Craft operatives would meet the Palins as they exited the interstate from Des Moines, about 45 minutes away, and escort them into town. The street outside the Pella Opera House, where the film was to be shown, was blocked off as satellite trucks arrived, television camera crews set up, and throngs of reporters and eager Iowans gathered. But as the hour of the event neared, the security men shrugged to one another; nothing from the Palins. Then, barely an hour before the scheduled premiere, came word that they had already arrived; they’d parked their rented Chevy Malibu and were up the street in a Dutch bakery, signing autographs and posing for photographs with admirers.

“They’re so Griswold!” observed one member of the team—a reference to the National Lampoon film series about a Midwestern family’s vacation misadventures.

The difference between Governor Palin and Mitt Romney couldn’t be more clear. Unlike the pompous Romney, Governor Palin is no prima donna. It was far more important for her to mingle, unencumbered, with every day people in Pella than to avoid them by hiding behind a wall of security as the narcissistic Mitt would have undoubtedly done. Governor Palin revels in the interaction with every day people, for she is one of them, while Romney remains aloof by erecting as many barriers as he can between himself and those he claims to want to represent, even to the extent of employing fake secret service agents and velvet rope barriers. Governor Palin, who genuinely relishes one-on-one encounters with the people, possesses the one attribute Romney’s millions can’t buy: authenticity.

Exit question: Is the stunt Romney pulled in Boston with those kids a function of his unjustifiably bloated ego or is it simply a bizarre case of paranoia?  His history of hiring bogus secret service agents, in my mind, argues for the former.