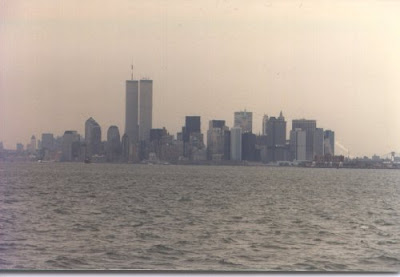 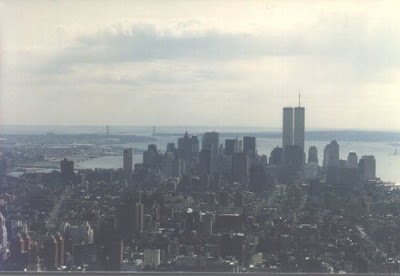 I shot the first two photos in the early 1990s, the first from the Staten Island Ferry, and the second from the 86th Floor Observatory Deck of the Empire State Building. The Twin Towers were an important part of my life, as they frequently punctuated childhood visits to Manhattan. I worked there for a week as a temp, worked six months in the neighborhood and celebrated my first wedding anniversary there.

A Day That Will Live in Infamy

When these attacks were launched upon our nation, I was working for Con Edison doing desktop support and LAN administration. I had been there about 18 months and had the good fortune to be at at our Victory Boulevard facility in Staten Island, some 30 miles away from the Twin Towers, that day. My wife was supposed to be exiting the Battery Tunnel at the time the first plane struck, as she would have been on her way to a dance class. After an hour of frantic calling, I learned that she stayed home.

I wanted a Reagan-like response to the September 11 attacks. As the hours passed, I waited. Nothing. Our response would come October 7, 2001 at 12:30 EDT. I was in Boston with my wife as we visited a relative of hers who was attending Harvard University on a partial scholarship. That day, I felt I had to visit all the historic sites in the area — Faneuil Hall, Bunker Hill, Lexington, Concord. When I heard “The Battle Hymn of the Republic” being played on church bells, I ran to find a TV, and that was where I saw that the war in Afghanistan had started.

While George W. Bush was no Ronald Reagan, he did keep us safe following 9/11, for there was not one attack on US soil. Indeed, many attempts were foiled and many al-Qaeda sleeper cells were busted up.

Much Visible Progress Made at WTC Site Since 2010

One WTC (Formerly “Freedom Tower”) viewed from West and Murray Streets in early September, 2010. The building was at the 36th Floor level and will rise to 1776 feet (1368 feet to the roof, with the remainder for the mast). 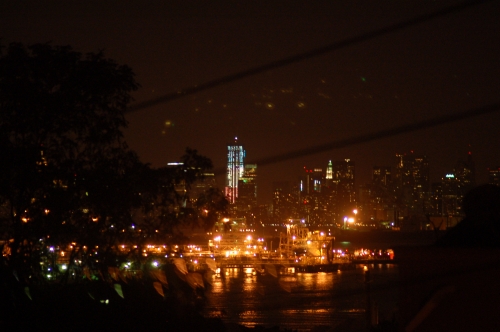 One WTC (Formerly “Freedom Tower”) viewed from from my third floor home office in Staten Island, NY on Saturday, September 10, 2011 at 2141 / 9:41 PM EDT. The building is now over 1,000 feet tall, and steel has risen to the 80th Floor. One WTC is lit in red, white and blue for the Tenth Anniversary of 9/11. If you look closely at the photo, you can see the lights of Four WTC very clearly. 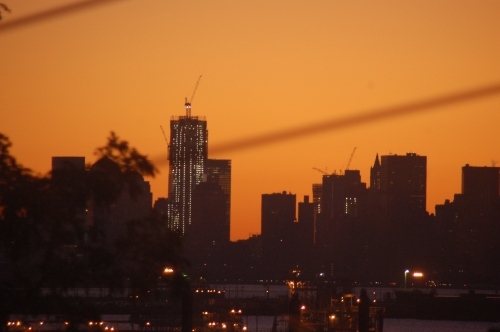 You can see regularly updated progress on the WTC site at the Port Authority of New York and New Jersey’s WTC Progress site.

It was at the same Victory Boulevard facility, nearly seven years to the day following 9/11, that I would hear the resurrection of Ronald Reagan. As I pulled my assigned minivan out of the lot and turned on the radio, her voice and words would so transfix me that after two blocks, I could not drive anymore. The yearning for leadership I felt at that location some seven years earlier was answered by the voice of a woman whose name I did not even know at the time.

Why Governor Palin Should Be Our Commander-in-Chief

Governor Palin has commander-in-chief experience and accomplishments that were concomitant with her job. Two very simple phrases describe her military doctrine: “peace through strength,” and “we win, they lose.” In her speech delivered at Colorado Christian University on May 2, 2011, Governor Palin outlined her five-point military doctrine in detail:

Watch as she interrupted her own VP campaign to return to Alaska and bid her troops farewell to Iraq on September 11, 2008. Her son, Track was among them. 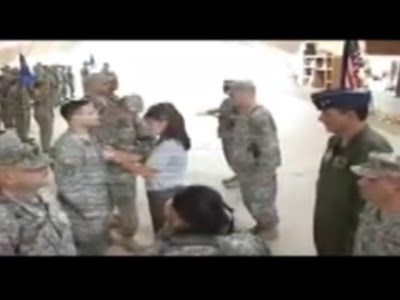 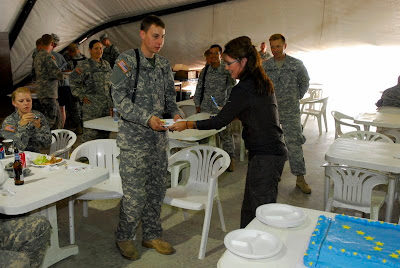 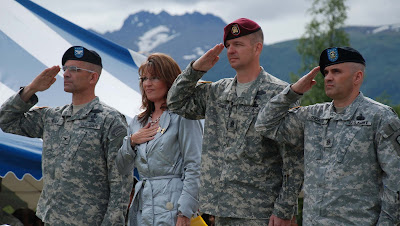 She saluted her Non-Commissioned Officers…. 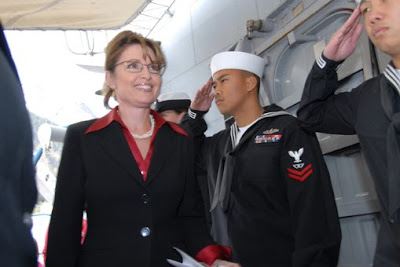 She was saluted as a Commander…

Headed to Walter Reed hospital this morn to meet wounded warriors;will give them msg of support from patriots who love these selfless troops (Palin, 2009, ¶1)

Lt. Governor, Alaska, and Former Adjutant General Craig E. Campbell Discusses Governor Palin’s Commander-in-Chief skills in the foregoing video. Special thank you to Gary P. Jackson for informing me about this video, which aired in 2008. Selected quotes from the video:

“Right after she got elected, when she was sworn in as governor, one of the first things in one of our briefings — she asked me, ‘Where are our soldiers (AK National Guard) deployed, and how can I go see them?” — Craig E. Campbell, Lt. Governor, Alaska

“When she came home to Alaska, she brought home ideas about what soldiers’ desires were, what family needs were and implemented those into law the following year…that’s what a Commander-in-Chief does – is take care of soldiers, take care of airmen, and she does it exceptionally well.” — Craig E. Campbell, Lt. Governor, Alaska

“She is above and beyond what a governor would do. I’ve watched and seen this for a long time in many states around the country. There a few governors that rise to the challenge, and they take the National Guard as their own, and they really want to provide the services that a commander-in-chief needs. Sarah Palin does that. She goes to deployments; she goes to returns. When we work the budget for the state, she wants to make sure that the state is putting the right amount of money in to support the soldiers’ and airmen’s needs and our National Guard. When she does policy, she makes sure soldiers’ families are taken care of in the State of Alaska. This is what a Commander-in-Chief does.” — Craig E. Campbell, Lt. Governor, Alaska

“As commander-in-chief, Governor Palin is the one we look to for leadership and inspiration while serving and defending the sovereign boundaries of Alaska,” said Lt. Gen. (AK) Craig E. Campbell, Adjutant General of the Alaska National Guard (Kosovo, 2009, ¶4).

Governor Palin at the WTC site and with FDNY 2008 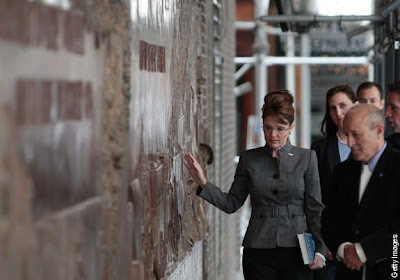 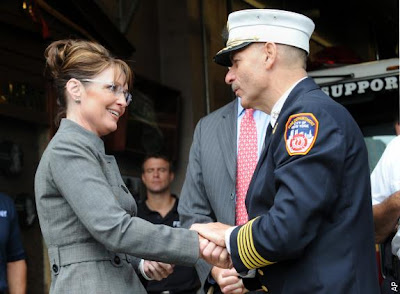 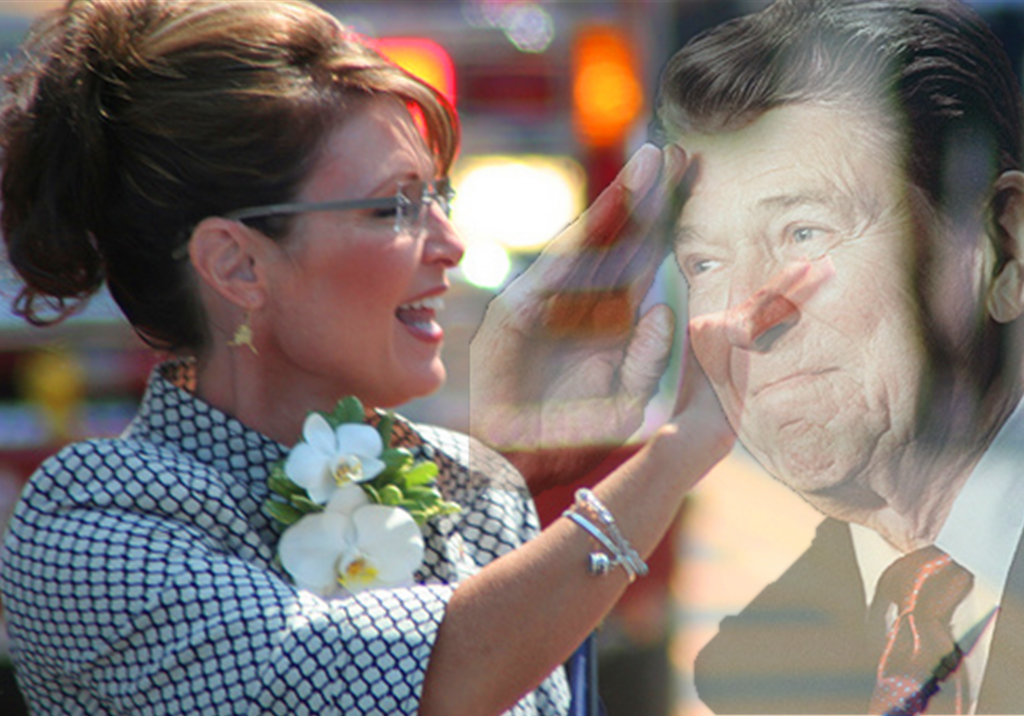