Todd Palin arrived to the landing zone in the back of a pickup truck. His teammates were assigned to take out the first set of land mines and a power transformer, at which point he swung into action. Palin tossed a smoke grenade to provide cover as his squad ran to a desert patrol vehicle that was delivered by helicopter sling load. Palin and his teammates undid the cables, then drove the vehicle to the next objective. A Humvee – to which a Browning M2 .50 caliber machine gun was mounted – accompanied the desert patrol vehicle. Upon arrival Palin took out the next four targets using a Beretta M9 9mm Parabellum pistol, to cheers of “holy cow!” from the next squad observing in the surveillance tent. His special op, J.W. Cortes took out the remaining targets with his SCAR 16. Palin then got atop the Humvee and took out two bunkers with the M2. The squad then abandoned both vehicles and ran toward the helicopter to extract them to safety.

Contestant Picabo Street said, “if I have to go against Todd in a shootout, it’s going to suck! He rises to the intensity and the more intense it gets, the more stealthy he gets.” But, Street was spared Palin’s stealthiness and marksmanship skills. Laila Ali and Nick Lachey went to the elimination round, resulting in Ali being sent home. Palin’s squad went on to earn their third stripe worth $10,000 for Armed Services YMCA Alaska. 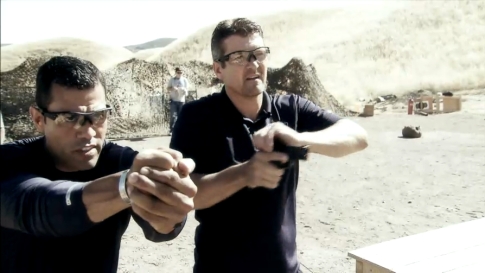 Todd Palin racks the slide on his M9 in training. 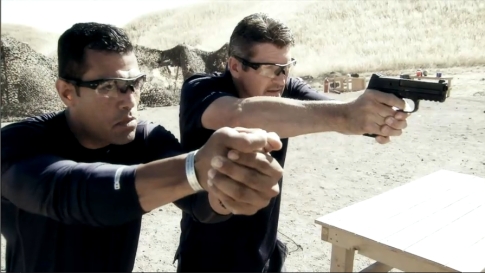 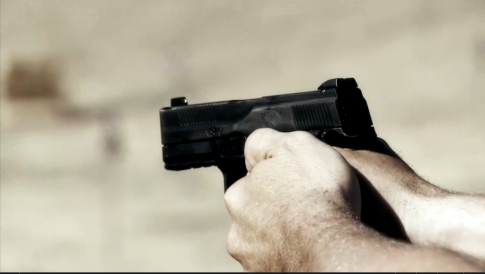 Close-up from the left: Todd Palin fires his M9 in training. 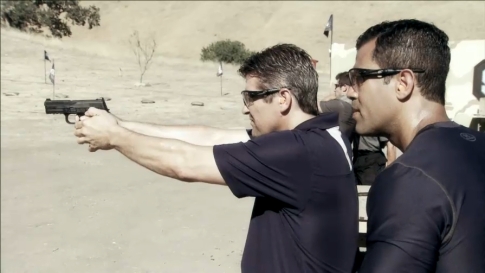 From the left: Todd Palin fires his M9 in training. 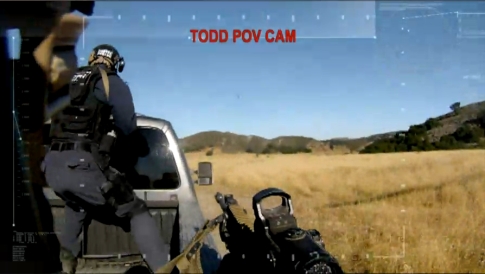 Todd Palin POV camera from the pickup truck bed on the way to the drop zone. 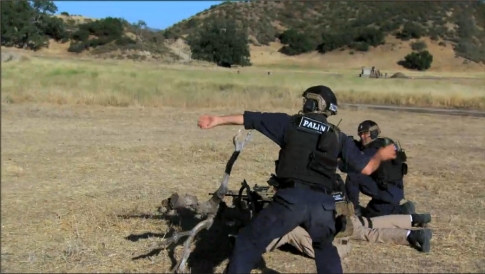 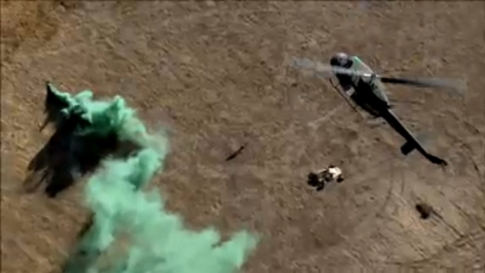 …As the helicopter delivers the desert patrol vehicle… 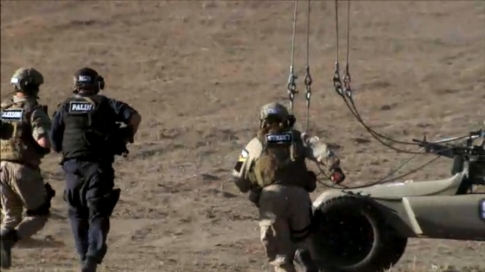 The squad runs to the desert patrol vehicle…. 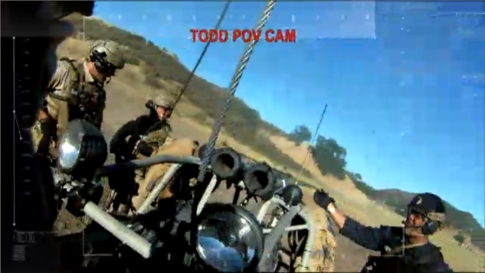 …and releases the cables. 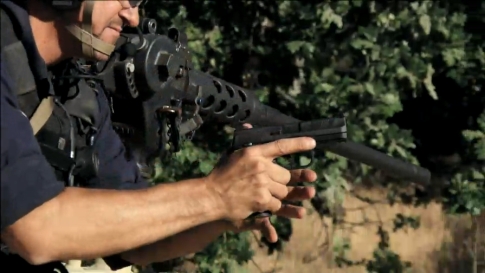 Todd Palin slaps a magazine in his M9…. 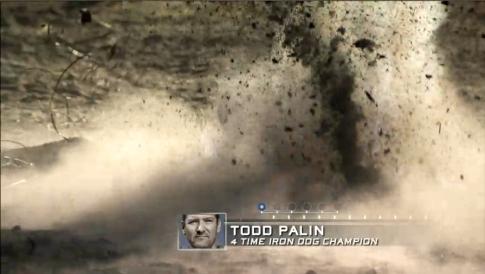 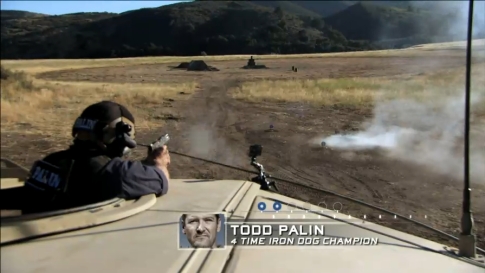 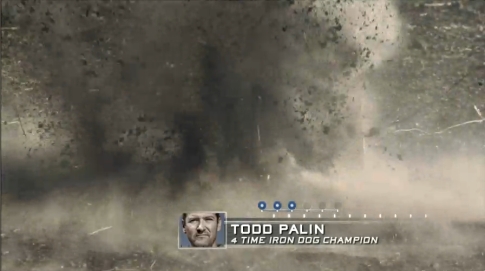 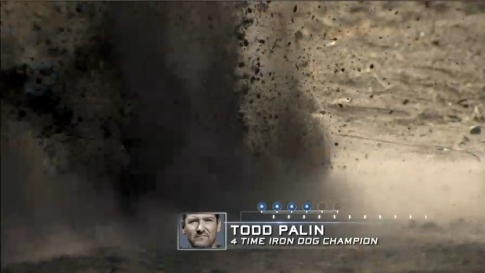 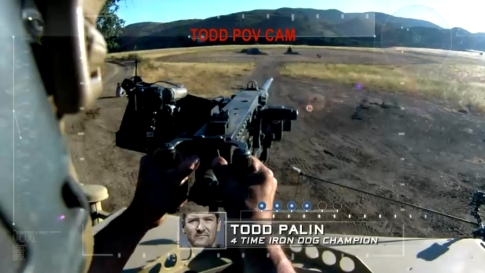 …shoots at the first bunker…. 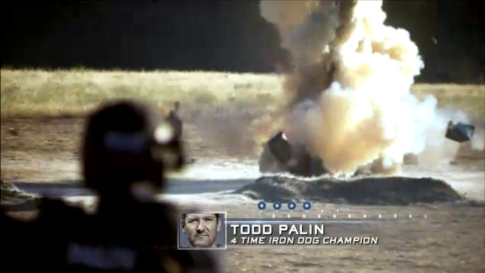 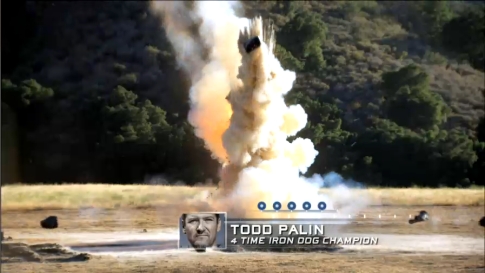 …which goes up in a column of smoke… 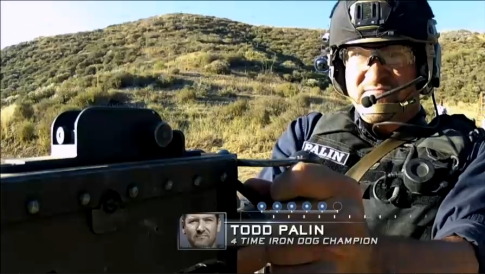 Todd Palin fires the M2 at his second and final bunker…. 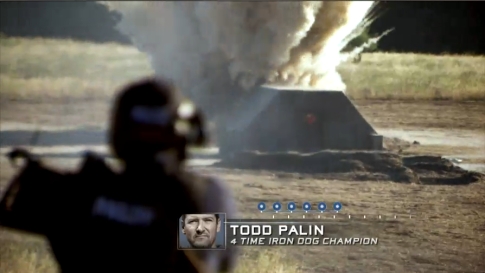 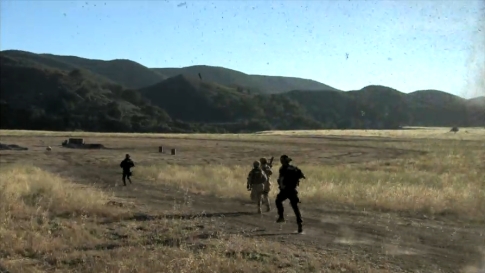 The squad runs to a clearing so the helicopter can extract them…. 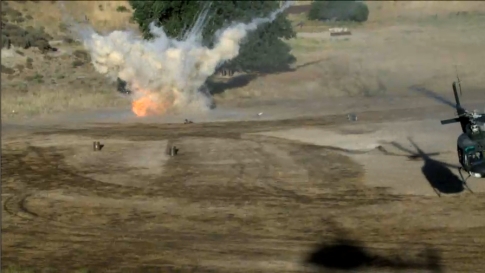 Invented by John Moses Browning, who is also known for the M1911, Browning Hi-Power, and BAR, the M2 is a crew-operated .50 BMG recoil-operated, belt-fed heavy machine gun. Its cyclic rate is approximately 550 rounds per minute. It weighs 84 pounds and the M3 tripod adds another 44 pounds. The M2 has served through both World Wars, Korea, VietNam, the Gulf War and Desert Storm. It can be mounted to aircraft, trucks and the M-1 Abrams tank.

Being a machine gun, the M2 is regulated under the National Firearms Act of 1934. Civilians can legally own it or any other fully automatic weapon if they submit to an extensive background check; pay a transfer tax to the Bureau of Alcohol, Tobacco, Firearms and Explosives; and their home state or municipality has not banned full-autos. The M2’s weight, cost to acquire and cost to shoot are prohibitive to all but the wealthiest of collectors, but one always makes an appearance at well-known machine gun shoots nationwide. 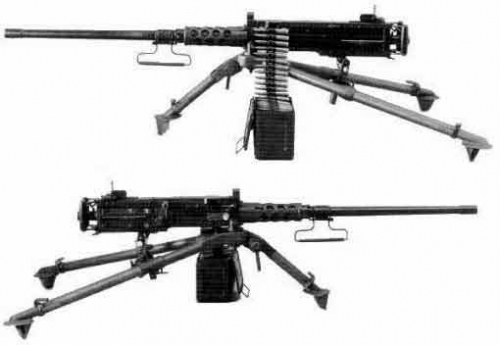 The Beretta M9 replaced the M1911 over 25 years ago, a move that was controversial at the time – and still is in many circles. The M9 fires 9mm Parabellum and the M1911 which had served our soldiers for 75 years is chambered in the more powerful .45 ACP. The M9 holds 15 rounds in its magazine compared to the M1911’s seven. Today, Para-Ordnance makes a 14-round M1911. It is 1/8″ wider in the butt. The M1911 is made in the USA by Colt, Springfield Armory, Kimber, and others. Beretta is from Italy, so many at the time objected to our sourcing our weapons to foreign manufacturers. The 9mm was chosen to comply with NATO standards.

Like most 9mm pistols, the M9 is double-action on the first shot, single on subsequent shots. This results in a heavy trigger pull on the first shot; something Todd Palin and all the other celebrity contestants had an issue with. Todd is used to long guns and does not work with pistols much, however, he learned fast and became deadly with the M9 in no time. The M1911 in contrast is single action with thumb and grip safeties, but there are safety issues with cocked and locked carry and handling. Many shooters have actually discharged it trying to slowly drop the hammer so that the pistol has a round in the chamber, but is not cocked. This is another reason why pistols such as the M9 found favor among the military and some law enforcement agencies. Still, despite the heavier recoil, the M1911 with its light trigger pull and 110-degree angle between butt and slide is ergonomically perfect and makes it easier to master.

The SCAR was the assault rifle of choice for this mission and was featured in Todd Palin’s first mission.