Chuck, Jr. Recaps Alabama, Will Be on Levin and Greta Tonight

Chuck Heath, Jr. journaled about getting the special treatment at Talladega Speedway on Wednesday, and he wondered how he was going to get the special gift, a Kyle Busch race-used tire, back home to Alaska. Yesterday, they went to UPS so that tire could beat them back to Alaska.

We stopped by a Birmingham, Alabama, UPS store to ship our tire (Kyle Busch’s) to Alaska. The UPS guys got a kick out of it. That was a first for them.

He includes this picture: 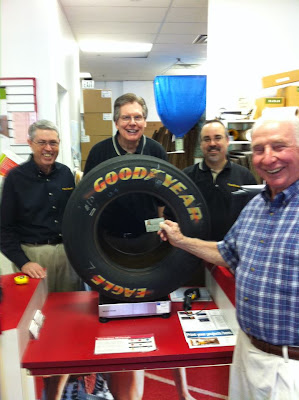 We started our day by doing an early morning television show called, “Good Day Alabama”. That went okay but we didn’t have much time to talk because they had a very full schedule. The host, Janice, works her rear end off on that show.

After that, we headed over to radio station WYDE, 101.3, where we spent a great hour interviewing with host, Lee Davis. Lee asked dad what his overall impression of the debate was last night, and dad, being the politically correct person he is said on air, “Obama looked like a kid who knew he had done something wrong and was about to be bent over Romney’s lap and spanked.” I cringed, Lee busted out laughing. Good ole’ dad.

We left Lee’s station in search of a barber… I really needed a haircut. We got lost again (thanks Mr. GPS) but through some kind of divine intervention, we ended up right in front of a UPS store. We had been talking about what to do with our NASCAR tire for quite awhile. We decided to go in and ask the UPS guys how much it would cost to ship it to Alaska from there. The first quote was 320.00! I thought they were joking. “We could by an airline ticket for that!”, I said. We ended up going back and forth, exploring every option, until we finally agreed on a price which was about a third of the first one. It was still way too much but as dad said, “this is an opportunity of a lifetime”. (How redneck is that?”

When we told the UPS guys to ship it to Wasilla, Alaska, they put two and two together and said, “Isn’t that where Sarah Palin is from?” The floodgates broke and we spilled our little secret again. We took some pictures with the guys and signed some autographs… our weird, indirect brush with fame.

I still needed a barber so our new best friends at UPS told me about one nearby. They also mentioned that if we were hungry, there was a great BBQ joint called, Jim and Nick’s right across the street from the restaurant. The restaurant’s motto is: If pigs could fly, we’d still eat them. We followed their sage advice and got two orders of baby back ribs, and a #4 haircut to boot. By the way, one of the ladies at the barbershop stopped dad and said she recognized him from somewhere. Dad said, “Yeah, that was me in Cell Block Six”.
He finally told them the truth and they raved about his performance on Sarah’s tv show. We ended up signing some napkins for them and taking some pictures. They were great.

We went back to our hotel and tried to take a much needed nap. I was exhausted but I couldn’t sleep because I was so worried that I’d sleep through my scheduled Mark Levin interview later that afternoon. I never did sleep, and then I got a text right before the interview saying that due to last night’s debate and the subsequent buzz, I was being bumped to tomorrow night. Errrr! not again! I understand that one, though.

We got up and drove to Trussville for our book signing. We met some great people but didn’t get the crowd we were expecting. Most of the people we have met in Alabama have been big supporters but only a couple of them even knew we were in town. We have to do a better job of promoting ourselves, which is very, very difficult because dad has drummed it into our heads for our entire life to just work hard and let others toot your horn. (I hope the meaning of that came across like I meant it to)

We went back to our hotel and had an appetizer in the restaurant. Ironically, our waitress, Lisa, was a Sarah Palin doppleganger who was also a fan. We then went to the elevator, where dad announced to everyone for the 112th time this trip, “Who’s driving this thing?!”.

Off to Dallas tomorrow. We’ll be doing Mark Levin tomorrow evening, and we’ll be on Greta the same night.

I heard the elevation down there is a few feet higher than here, so I hope we get there early enough to acclimate so we can think straight.

Man, it sure sounds like they’re having a blast!