Heaths Get the Our Sarah Treatment at Talladega Speedway

Governor Palin’s father and brother have made many people smile over the last several days as they’ve rolled out their new book, Our Sarah: Made in Alaska, often making supporters feel quite special. Today, it was their turn to feel extra special. What they experienced today is another testimony of the backing Governor Palin has throughout the country.

Dad and I got a real treat today. On our way to Birmingham, Alabama, (we were driving this time) we saw a sign beside the road saying, “Next exit, Talladega Speedway”. I told dad that we should pull in and try to get a picture of it. He didn’t want to at first but boy is he glad did now.

We pulled off the freeway and headed towards the speedway. We knew we were close when we spotted some gigantic flags waving over a field full of motor homes. We found out later that motorhomes start showing up there up to three weeks before a major race. There are literally hundreds of acres of fields surrounding the stadium, and by raceday, those fields are blanketed in motorhomes.

We stopped and took a picture at the gate outside of the stadium. That’s all we were going to do but I convinced dad to try and see if we could peek inside and take a photo. We drove up to the entrance where we were stopped by a security guy named, Bobby. He said no one could get in without a special pass and that we needed to immediately turn around. I started to turn but as I did, I stuck my head out the window and said, “Tell your boss Sarah Palin’s dad stopped by to see your speedway!”

He said, “Hold it right there. Are you serious?” I told him I was and I even flashed him one of our book covers to prove it. He said, “Just a minute…” . He got on his phone and called someone. He told us to wait there and someone would come talk to us. While we were waiting, a few more people emerged from the guard shack to shake hands and say hello. An old man with an accent so heavy I had to lean in to understand him, named Doyle, said to me, “Ya tell yo sista that she betta be runnin in 2016. Sho wish she’d run this time.” His wife, Gail, echoed that sentiment.

A few minutes later, a security guard named James (everyone calls him, Doc) picked us up. He took us on an unbelievable tour of everything there. We first drove out to the infield, and then we actually got to drive on the track. Then we went to Victory Lane and took a picture. From there, we went down to pit row where we met some of the crew members and other personnel. We got to check out Clint Bowyer’s new car. Interestingly, one of our 2nd cousins, Dan Deeringhof, used to be Clint’s crew chief.

After that, Doc took us over to a garage full of used racecars called, The Dale Jarret Experience. We got to meet the guy who runs the place, and as a goodbye present, he gave us a race-used tire from Kyle Busch’s car! We’re lugging it around now and wondering how we’ll get it home.

Then we stopped by a big catfish fry for most of the people that help run the speedway. We met a ton of people and all of them had great things to say about Sarah and Alaska. We were treated so well… which was pretty embarrassing for dad and me.

Doc then took us back into the stadium where we got to watch different racers test the new, 2013 cars. It was amazing. TV does not do justice to how fast and loud those cars are. There was only one other person in the entire stadium sitting with us (200,000+ seats) so we felt extra privileged to be there.

From there we were taken to the Speedway’s museum. Unbelievably, we were given free reign of the place (thanks, Connie!). We saw a lot of historic cars that we’d only seen in books and on television before.

We left in awe of what we’d just been through, and we have a great memento to take home with us (if we can figure out how to ship it!).

We made it to Birmingham, dad’s taking a nap, and then we’ll go out to dinner with some old friends who live here… and they’re doing some of our laundry, too!!! 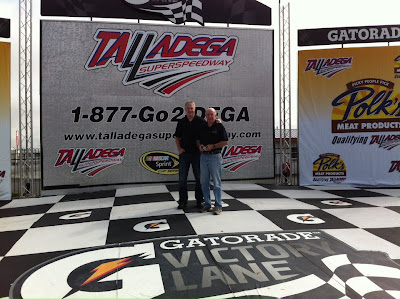 looking for Ricky Bobby at Talladega. 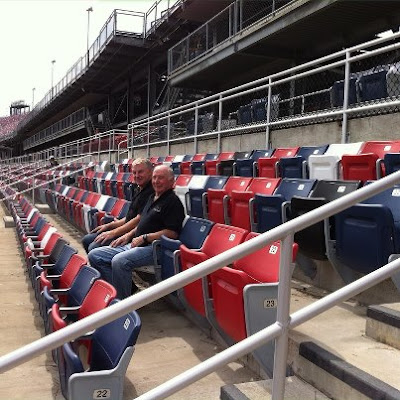