Heaths: People Should Examine Positives Sarah Did for Alaska – Devito

“Why don’t people look at the positives Sarah did for Alaska,” Sally Heath asked her husband and son regarding how some in Alaska treat her daughter. Both men discussed this matter with me when I met them on Friday to have my copy of Our Sarah: Made in Alaska signed and spend some quality time in their company. See “Our Sarah”: Open Window to Heath and Palin Lives, Times for my review. During my meeting with the Heath gentlemen, it became clear that Former Alaska Governor Sarah Palin and her record are still very much routinely sullied in Alaska, with establishment Republicans being even worse enemies than leftist Democrats. 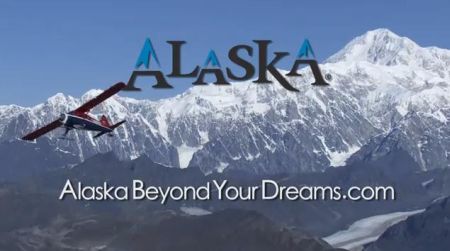 Gov. Palin has brought in untold millions of dollars to the Alaskan economy via tourism from people who became fascinated with the state by virtue of her association with it, as well as the purchase of various products from the state. There is certainly more than enough anecdotal evidence to support this claim, but no one has made an attempt to quantify her benefit to Alaskan tourism – until now. This is a project I agreed to undertake, and it will consist of several core components.

First, I will be collecting anecdotes from people who have made the long and expensive journey to Alaska motivated at least in part by something to do with Gov. Palin. These tourists could be Palinistas who wanted to spend some time on Gov. Palin’s stomping grounds – in the company of her family and friends – that is they traveled for a Palin-specific purpose. Other tourists could have simply been fascinated by the state and got that final impetus to make the trip after seeing or hearing Gov. Palin in some context, though they are not necessarily Palinistas.

Alaska is also benefiting from people who never set foot there, but who buy one or more Alaskan products because of the Palin connection. For instance, I am a regular drinker of Mocha Moose Good Morning Alaska, and Whoa Nellie. When I learned the former is Gov. Palin’s favorite coffee, I started having bags of it shipped to my house. I must have consumed about $500 worth of this delicious coffee by now. It’s far better than any of the chain or supermarket brands. The main Mocha Moose shop used to be the house in which the Heaths lived – a fact they documented in Our Sarah and during last week’s interviews. I drank four cups of Good Morning Alaska with my breakfast before leaving the house to meet the Heaths, and four cups this morning. My consumption of Mocha Moose products – motivated by the Heath and Palin connection – is a small example of how Gov. Palin and her family brought and continue to bring positive economic benefits to Alaska.

Second, I will conduct a poll about the Palin connection to Alaskan tourism, and I will focus on the Sarah Palin’s Alaska series. I will attempt to quantify via research with the Alaska Film Office how that series specifically brought tourism dollars to the state.

While the Heaths and I discussed Gov. Palin and tourism, I will not stop there. I will integrate my continuing coverage of Alaska’s Clear and Equitable Share – ACES – which is responsible for at least $2 billion per year in tax revenue that goes to state savings. While other states hemorrhage money, Alaska has a surplus – thanks to the policies Gov. Palin and her administration put in place. Governor Parnell and cronies like “Make Alaska Competitive” want to repeal ACES and bring back the corrupt pre-Palin days when the oil company lobbyists were in bed – figuratively and literally – with Alaska’s legislators. Gov. Parnell’s designs on ACES are a frequent topic on Alaska’s Bob and Mark Show.

Finally, I will examine some of Gov. Palin’s other past and present economic accomplishments – such as Alaska’s state credit rating increasing under her steady hand – and integrate them into this project which will unfold over the coming days, weeks, and months.

Humbled, Honored to Have this Special Moment 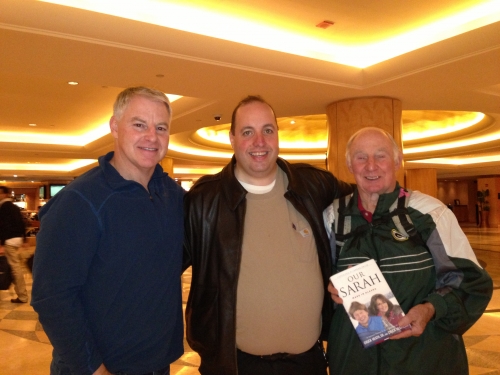 It was truly an honor and a privilege to have met with Gov. Palin’s father and brother – Chuck Heath Sr., and Jr. last Friday, on New York City soil – my home turf – and to have this photo be the first one taken with my new iPhone 5. I had met Chuck Sr. three years ago in Rochester at the Going Rogue book signing. I had never met Chuck Jr. till this point. It is a pleasure to be in the company of authentic, sincere, down-to-earth people who make you feel at ease. In describing prior experiences with Gov. Palin, I had used the words, “Ordinary. Extraordinary.” They are equally applicable to her parents and brother.

One of my goals resulting from this meeting is to ensure that people see the many positives Gov. Palin – Chuck Sr.’s and Sally’s daughter – brought and continues to bring to Alaska.

On With the Book Tour…

After our meeting broke up, the Heaths went to JFK Airport and on up to Rochester to begin their book tour. Donna Farrell Hoy, an American Grizzlies United/Organize4Palin NY volunteer and her daughter Bailey executed the Heath’s “Great Laundry Exchange.” Hoy also secured a radio interview for the Heaths with Bob Lonsberry. The Heaths are currently in Florida with a tour stop scheduled at The Villages, and Alpharetta, GA thence.