Mr. L reviewed Our Sarah: Made in Alaska, and discussed the political future of former Alaska Governor Sarah Palin in a broadcast he released yesterday. Political commentators on both left and right have jumped to the erroneous conclusion that Gov. Palin has left politics because of a picture she posted on Facebook in the minutes prior to her daughter Bristol’s Week Three Dancing With the Stars performance, and a picture of her reading the National Enquirer on a supermarket line. He laughed off pundits who speculated that Gov. Palin’s appearance in a sleeveless dress suggests she is out of politics. Should women look like Hillary Clinton? he asked. “What should she read on a supermarket line? Tolstoy? Dostoyevsky?” Mr. L asked sarcastically. 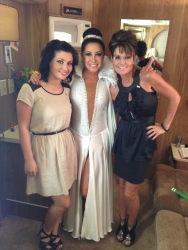 Mr. L said Gov. Palin’s father and brother do not know what the future holds in store for her. He said Romney’s performance as President – assuming he wins – is an unknown. He cautioned listeners to not “fall asleep” just because a Republican is back in office.” Romney could do well, or he could do poorly enough to be primaried. Or, Obama could win.

He said Our Sarah is as much a book about Alaska as it is about its former governor. He quoted a passage from the book in which the Heaths wrote that Alaska has beautiful scenery everywhere you turn, but death is always very close in the Final Frontier.

Mr. L detailed the matriarchal society of Alaska’s Natives, the tradition of the “wise woman” and how they shape the characters of both Gov. Palin and her husband, Todd who is part Yup’ik.

Mr. L said he supports Gov. Palin whether she chooses to run for another office or not. He said some supporters were so invested in a 2012 Presidential run that “they were so far up her behind they were touching her tonsils!”

In his synopsis, Mr. L wrote,

“My review of the new book “Our Sarah” written by Sarah Palin’s father and brother Chuck Heath Sr. and Jr. According to punditry on the right & left, Sarah Palin is done with politics. They believe this due to a few candid pictures taken of her last week. Sarah Palin goes on Fox News and makes one strongest and most encouraging statements about running for office in the future. Sarah Palin 2016 or 20___? Who knows? If her own father and brother don’t know, how can any of her supporters pretend to know?”