We had a great group of people come to our Alpharetta/Atlanta signing today. Here’s a picture of some of them. We were able to do a Q & A with them and we talked for over an hour. Dad said that if he would’ve talked for another 5 minutes, no one would need to buy the book.

Our hotel is only five minutes from the Barnes and Noble where we did the signing. It took us 42 minutes to get there because our GPS is whacked. One time, it told me “turn hard left now”. I did and ended up heading the wrong way down a busy one way street. Eventually we found the store, the old fashioned way… we asked someone (that’s a very hard thing for a couple of guys who spent most of their lives in the wilderness to do).

Anyway, it all turned out well and we met some great people. 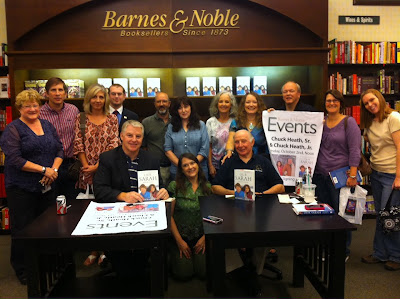 Also, like his sister, Governor Palin, Chuck understands the importance of energy independence and the role Alaska is able to play in it. He writes:

Somebody asked me today if we should be taking oil out of some of the locked up land in Alaska to help reduce our Nation’s dependence on foreign oil. I started thinking about how the rise in gas prices over the past four years has affected me and and my friends… especially my friends that commute from the Valley to Anchorage (all told, there are over 65,000 Valley residents that make that commute).

The teacher in me started doing the math. Gas was approximately 1.85 a gallon in 2008. Let’s round that up to 2.00 to make this easy. The average commute from the Valley to Anchorage is 40 miles each way (I know most of you drive farther than that). At 2.00 per gallon, figuring you average 20 miles per gallon (most people drive trucks at home so get less than that) you were paying at least 40.00 per week for fuel. Fast forward to today, that would be at least 80.00.

I didn’t even get into how much these increased fuel prices inflated food prices due to transportation costs.

Okay… I’m really not playing politics here. I’m just frustrated because I believe there are ways to responsibly develop our state’s natural resources, take care of our environment, and ease the financial burden we’re all feeling.

I know that I don’t personally take near as many long trips as I used to because of gas prices.

It’s late so thanks for letting me vent. I’ll lighten up tomorrow.