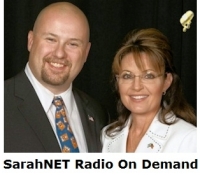 SarahNET Radio today reported that it will be adding a new feature to its weekly Palin Update. “Steel Resolve” will consist of commentary from former U.S. Senate candidate Sarah Steelman. SarahNET reports:

SarahNET Radio is adding more Sarah to its lineup. The network dedicated to promoting Governor Sarah Palin and providing Palin news features the weekly shows The Palin Update with Kevin Scholla and Breaking It Down With Bristol.

Now a weekly commentary is about to start starring Sarah Steelman. Steelman, who was endorsed by Governor Palin during her run for U.S. Senate in Missouri had the support of many conservative groups. Through this new weekly feature titled Steel Resolve, Steelman will have a platform to continue to address the issues affecting Americans today. “Sarah Steelman stands for honesty, integrity, and values. She is a real person living in the real world and I know she will be a tremendous asset to our broadcasts,” said Kevin Scholla host and creator of SarahNET Radio. “She speaks like Governor Palin. Real talk that resonates with real Americans,” Scholla said. Steelman is looking forward to getting started as well. “I am very excited to join Kevin Scholla on SarahNET Radio with a weekly commentary about politics from the perspective of a recovering politician!”

Steel Resolve- A weekly commentary featuring Sarah Steelman will air as part of The Palin Update with Kevin Scholla. Listen to SarahNET Radio at www.sarahnetradio.net and follow along on twitter @SarahNETRadio @kevinscholla and @Sarah_Steelman

Gov. Palin stumped for Steelman and served food at the candidate’s barbeque on August 3.

Here is a better quality video of the speech above: