As I opened Heaths: People Should Examine Positives Sarah Did for Alaska, I described how Sally Heath asked her husband, Chuck Sr. and their son Chuck, Jr., “Why don’t people look at the positives Sarah did for Alaska.” I recounted how “both men discussed this matter with me when I met them [September 29, 2012] to have my copy of Our Sarah: Made in Alaska signed and spend some quality time in their company.” In Positives, I announced my agreement to undertake an three-part economic impact study to quantify Gov. Palin’s benefit to Alaskan tourism, the first part being this collection of anecdotes. A survey, and a more scientific collection of statistics are to follow.

One colleague of mine, Lynda Armstrong flew to Alaska from Texas and stayed at a friend’s house. Gov. Palin was the principal motivating factor in her trip, especially after she saw the Sarah Palin’s Alaska series. Her airfare was $656 and she spent $1,100 in the state. Armstrong visited the Heath and Palin homes and stayed mainly in the Anchorage / Mantanuska valley. 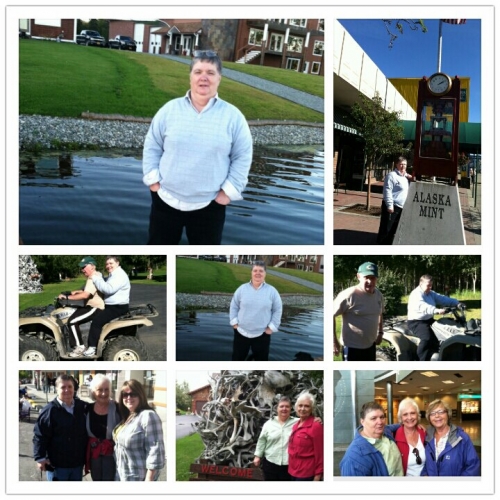 The one Sarah Palin item she was able to purchase were two special medallions from the Alaska Mint with Gov. Palin’s likeness on them. These medallions start at $24.95 for bronze and go up to $2,400 for solid gold. 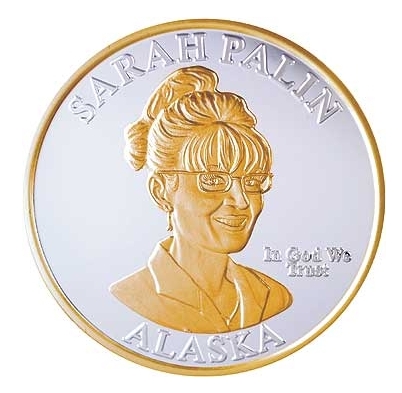 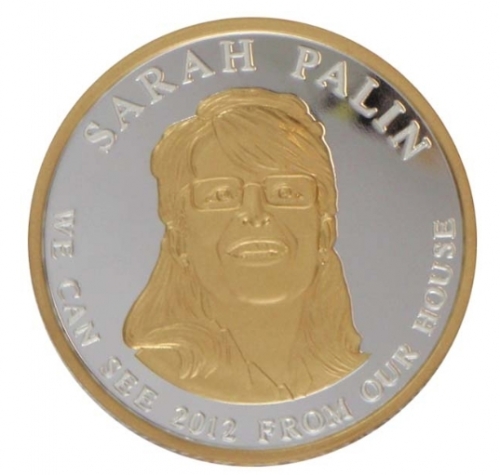 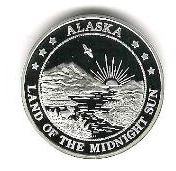 Armstrong is a dedicated Palinista. She attended the Our Sarah book signing in Highland Village near Dallas, TX; Gov. Palin’s stump speech and barbecue for Kirk Adams in Arizona, and Gov. Palin’s 2010 stump speech for Susana Martinez who was running for Governor of New Mexico. Armstrong is the first woman to work in the field for a major oil company and plied her trade in western Texas.

Bobby, a colleague of mine from work took his family of four to Alaska last year. His trip was not Palin-motivated, but he did want to at least pass through her hometown, Wasilla, for which he used the Alaska Railroad. He told me that Gov. Palin “is very popular up there,” but Bobby simply wanted his family to see a state that fascinated him. Bobby spent $8,000 on this trip, which for four people is $2,000 per person. Bobby said airfares must be booked well in advance or they will be extremely expensive.

Another colleague of mine who wishes to remain anonymous visited Alaska in July 2009. Her trip was entirely Palin-motivated. She spent a month in the state and even with her efforts to keep costs down, my colleague spent $4,100 on: lodging at several hotels for 10 out of the 30 nights she stayed; gas for a friend’s car; meals; air fares; and miscellaneous items. My colleague used the Alaska Railroad for a trip from Fairbanks to Wasilla, and visited museums. Gasoline in Alaska is very expensive averaging a $1 per gallon higher than the Lower 48.

Lynda Armstrong’s father and his girlfriend (his wife died five years prior) took an Alaska cruise in 2010, which cost $2,399 per person for a total cost of $4,798. The couple each spent $400 on incidentals bringing the final cost not including airfare to $5,598. The couple first flew to Canada, where their cruise originated. One of the ports of call was Juneau, Alaska’s capital. Mr. Chatagnier wanted to see the place “where my daughter was talking about Sarah.” They used the Alaska Railroad to tour towns on the land portion of their trip.

Stephanie Todd, North Carolina State Coordinator, American Grizzlies United / Organize4Palin and her husband visited Alaska three times in the past four years. They spent $12,000 on the three trips combined, resulting in an average of $4,000 per trip for the couple.

“I had the privilege of traveling to Alaska three times in as many years. Two of them were Alaskan cruises aboard the Princess with a couple of days added in Alaska before or after each cruise,” Todd said. Their cruises were in 2010 and 2012. “On the cruises we visited Ketchikan, Juneau and Skagway, Glacier Bay, Hubbard Glacier and College Fjord,” she said. 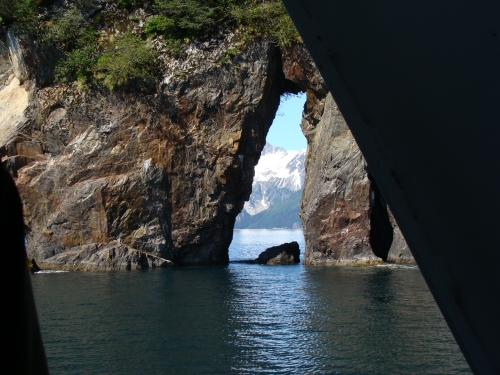 In 2011, the Todds took a 10-day land trip through Anchorage, Wasilla, Palmer, Hatcher’s Pass, Denali National Park, Seward, Homer, and Matanuska Glacier. They visited Anchorage, Wasilla and Palmer, Hatcher’s Pass on the cruises as well when they disembarked at ports of call. “This past summer we visited the Martin Buser Iditarod Tour and climbed the Butte. I learned about those two from watching Sarah’s show.” 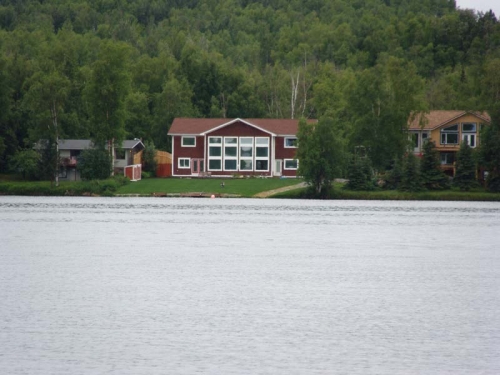 We stayed at a beautiful B&B in Wasilla on two of our trips. It’s called Alaska’s Lake Lucille B&B. Carol is a great hostess. I love to plan trips and created the entire itinerary,” Todd said.

The couple kayaked in Homer; took a Kenai Fjords boat tour in Seward; used the shuttle bus in Denali National Park, took a train ride in Skagway and whale watched in Juneau. They also did “free stuff like taking in the sheer beauty of the place.” 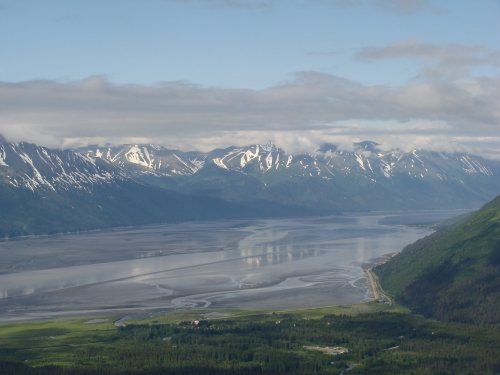 “It’s hard to say how much we spent on souvenirs,” Todd said, but she estimated $500 on those and $500 on other incidentals, bringing her final cost between the three trips to $12,000. The Todds purchased three photo albums bearing the Alaska State Seal; an Alaskan-made Eskimo doll in Ketchikan; sweatshirts; T shirts; hats; Sarah Palin calenders and books; Glacier Smoothie soap in Juneau; Ulu Knives; Apenglow lip balm in Homer; and a batch of Mocha Moose Good Morning Alaska coffee. “I have also ordered the Glacier Smoothie soap and Apenglow products, and products from Blue Moose in Anchorage. I absolutely love Alaska. I never thought about visiting there until I became a huge supporter of Sarah. I look forward to visiting again,” Todd said. Her goal is to visit Valdez sometime and see the Alaska pipeline.

“I really enjoyed planning the trips. It can be very overwhelming getting started but know I feel like a pro. I contacted several chambers of commerce for different towns and have several brochures,” she said. 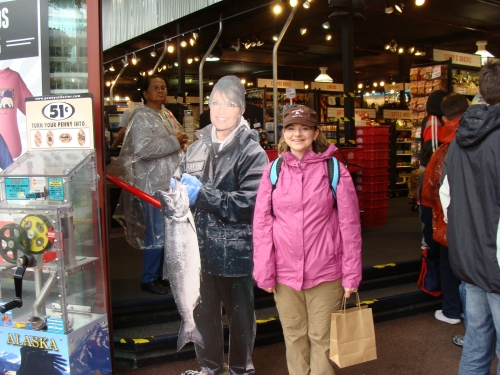 “I love Alaska and Sarah and Todd and their families. I wish I could have met them while up there but I know they are busy. I did have the honor of meeting Sarah at the Extraordinary Women Conference in Greenville this past March. I look forward to meeting her again someday soon so I can let her know what an inspiration she is to me. My time in Greenville was so brief,” Todd said.

“I would also like to add that I found a classic country radio station – Country Legends 100.9 – this past summer out of Wasilla. I listen to it on the Internet while at work sometime. I also tune in to the Bob and Mark Show on occasion,” she concluded.

Cathy Maples, President, R & D Electronics donated $60,000 to Ride2Recovery in late 2009 to help the organization’s wounded warrior efforts. She won a four-hour dinner with Gov. Palin, which she partook in after the 2010 Southern Republican Leadership Conference (see also: Backstage Pass).

Last year, Maples took seven people with her to Alaska on a trip that cost over $60,000 for the group not counting airfares. The average spending of the Maples’ group, therefore, was $7,500 per person. Her group’s trip was entirely Palin-motivated. Maples recounted her group’s activities while in Alaska. 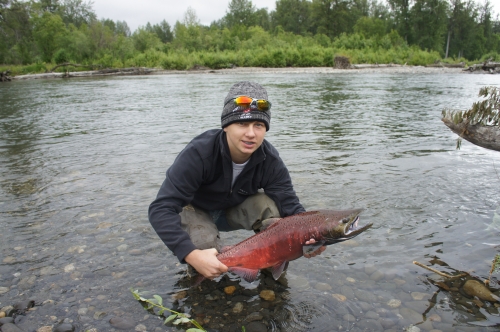 First, they departed Anchorage via Rusts Flying Services floatplane for a day of fishing at Lake Creek. They ate lunch at Riversong Lodge at Lake Creek and returned to Anchorage at 6 PM that evening. 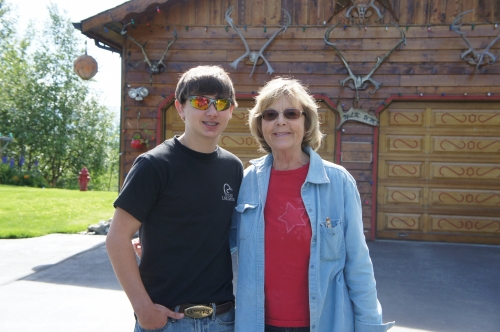 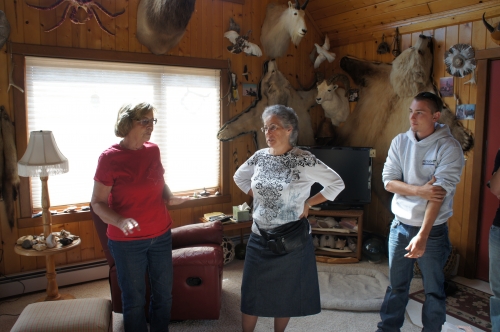 The following day, the group was free to explore Anchorage and the surrounding area. They drove to Wasilla and were passing the Heaths’ house. They saw Sally Heath pulling into the driveway and pulled in behind her. Sally was gracious and warm. She invited Maples’ group into the Heath home and they had a photo session.

After meeting with Sally Heath, the group went on to Talkeetna to take a rafting trip on the Talkeetna River, which Maples described as “awesome.” The group returned to their base in Anchorage that night.

On the third day, the group went to Whittier, thence took the 4 ½ hour 26-Glacier tour to Prince William Sound, offered by Phillips Cruises. 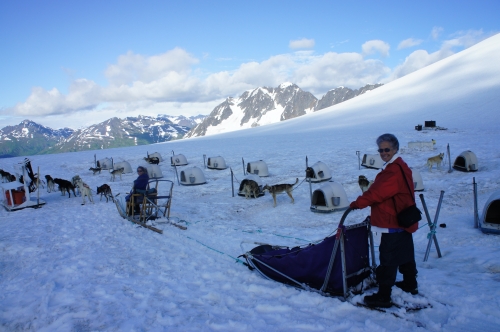 On the fourth day, the group departed Anchorage at 10 AM for Girdwood. From there, they took a helicopter to a Glacier and on the glacier took a two-hour dog-sledding tour. This was the group’s favorite.

On their fifth day, Maples’ group went to a flea market and toured Anchorage. They took a guided ATV tour and went shooting at an Anchorage range.

The group used Alaska Tours for their fourth and fifth day’s activities.

From these anecdotes, we see that travel to Alaska involves an investment of between $1,800 and $7500. The overall average amount spent per person among all 17 tourists is $5,559. The midpoint between the two extremes is $6,900. All 17 tourists combined brought $94,498 to Alaska.

The 12 people specifically and wholly motivated by Gov. Palin alone brought $83,498 into the Alaskan economy via tourism and spent an average of $6,958 on their trips.

The five non-Palinista tourists spent an average of $2,200 each and brought $11,000 to the state combined.

Palinistas Spend up to 3.16 times more than Non-Palinistas in AK

These anecdotes also suggest that Palinistas generally spend up to 3.16 times more than non-Palinistas in the state – even when they’re on a tight budget. Since we only had one Palinista at the low end, three at the mid-range, one couple who took three trips; and eight in the Maples group, the statistics are skewed in favor of the high end with a $6,958 average for the Palinistas.

Alaska is very far from most points in the continental United States. Food, fuel, transportation, and activities in Alaska are expensive. Being a Palin fan, supporter, or both is also a rather expensive habit. As we see in these anecdotes, most of the activities travelers engaged in have absolutely nothing to do with Gov. Palin, but she motivated these people to take these trips and thus infuse significant sums of money into the Alaska economy. Even at the low end, an Alaska trip is a significant investment that no traveler is going to pick off a bargain basement bucket list. Though domestic, the costs of an Alaska trip are in line with what one would expect to pay for a European vacation in major cities such as London, Paris, or Rome. The flight from New York City to Anchorage takes as long as a flight from New York City to Warsaw, Poland.

These 17 tourists each brought home precious lifetime memories and formed a permanent connection with the state which will likely result in continued Alaskan product purchases as the years go on. I’ve already spent over $500 in the state, as I wrote in Positives, via my regular purchases of Mocha Moose Good Morning Alaska, and Whoa Nellie coffees; and I was gifted with Palin Calendars and Books, which are made in Alaska. I drive my poor wife nuts, because when we buy salmon, I insist on it being Alaskan. We can probably add another $500 for Alaskan salmon over the past four years. There’s $1,000 into the Alaskan economy motivated by Gov. Palin and I never even set foot there yet.