GAO: Obamacare will add at least $6.2 trillion to the national debt

And that’s probably a best-case scenario. Let’s flash back to September 9, 2009 when Obama delivered his infamous “You Lie” speech to Congress. The speech came at the end of a summer in which people across the country, led by Governor Palin, came within an eyelash of stopping Obama’s disastrous health care takeover which is about to cut off what little economic growth we’re experiencing like a guillotine. In order to revive after that Tea Party summer, Obama and his lap dogs in the media and Congress had to lie repeatedly about the plan’s cost. Here’s an example from the aforementioned speech:

I will not sign a plan that adds one dime to our deficits — either now or in the future.  (Applause.)  I will not sign it if it adds one dime to the deficit, now or in the future, period.  And to prove that I’m serious, there will be a provision in this plan that requires us to come forward with more spending cuts if the savings we promised don’t materialize.

Even a couple weeks after Obama had rammed his unpopular plan through Congress when he has no more reason to lie, he still couldn’t help himself:

This represents the biggest deficit reduction plan since the 1990s,” Obama said. “Now there has been a lot of talk about deficits lately and rightly so. These numbers keep me up at night.

I’m sure Obama’s losing a lot of sleep at night worrying about deficits, heh. I digress. Obama wasn’t the only one peddling Obamacare as a deficit reduction plan. Right after he signed the bill, then House Speaker Nancy Pelosi called it “the single largest deficit reduction effort in nearly two decades”. More recently, Pelosi claimed that “the main reason to pass [Obamacare] was to decrease the deficit.” There’s plenty more of this BS but you get the picture. Of course nobody familiar with the basic laws of mathematics believed any of this, but, as I explained at the time, Obama was able to game the system with plenty of help from a pliant media so that a (barely) sufficient number of lawmakers went along with the subterfuge:

Garbage in, garbage out. The CBO was asked to score a ten-year plan which spends basically nothing in the first four years. This enables the Democrats to make the claim that it only costs $940 billion “over 10 years”. They say a picture is worth a thousand words and the following graph, produced by Phillip Klein at the American Spectator, proves this to be true: 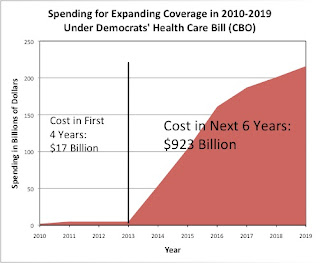 Hmmmmm. I can’t put my finger on it but something doesn’t look quite right.

Today the General Accounting Office (GAO) threw some cold water in the faces of anyone who still believes that Obamacare is fiscally sane and will somehow reduce the national debt. Via Andrew Stiles at the National Review:

The GAO report is essentially the first attempt to isolate and calculate Obamacare’s impact on the deficit beyond the traditional ten-year budget window. GAO ran two simulations “based on broad sets of assumptions about health care spending and other components of federal spending and revenue” over a 75-year period. First, a baseline-extended simulation, which “illustrates the long-term outlook assuming federal laws (applicable at the time the simulation was run) remain unchanged,” and second, an alternative simulation, which “illustrates the long-term fiscal outlook assuming historical trends and policy preferences continue.”

The baseline scenario is far more optimistic, largely because it does not take into account the concerns — expressed by the Congressional Budget Office (CBO), the Centers for Medicare & Medicaid Services (CMS) Trustees, and Medicare’s chief actuary — about “whether certain cost-containment mechanisms included in PPACA can be sustained over the long term.”

However, the GAO report concluded that even under these “more optimistic assumptions,” Obamacare’s cost-control provisions “were not sufficient to prevent an unsustainable increase in debt held by the public.”

The alternative scenario, which incorporates the more realistic “alternative projections” suggested by CBO, the CMS trustees, and the chief Medicare actuary, is even more dire. Under this scenario, the “primary deficit” increases by 0.7 percent of GDP over the 75-year period. The GAO does not put a dollar value on that figure, but Senate Budget Committee staff has calculated, and GAO has confirmed, that it would amount to a $6.2 trillion increase in the federal deficit.

In his piece, Stiles also links to a video in which Senator Sessions discusses the GAO report:

Again, none of this is a surprise. It does get me to thinking, though. In my first quote above where Obama claims Obamacare won’t add “one dime” to our deficits, he also said there would be a provision in Obamacare that “requires us to come forward with more spending cuts if the savings we promised don’t materialize.” Notice he said “spending cuts” and not “tax increases”. So … when can we look forward to Obama’s proposal for $6.2 trillion in spending cuts? Just asking.