(The following is a guest submission from Ron Devito.) 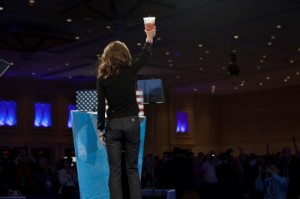 The Republican Party has been waging war on its own grassroots for over 100 years and winning, because up till now, those targeted had no idea they were even in a fight, the staff of Conservative HQ wrote March 22, 2013.

Because former Alaska Governor Sarah Palin has rallied the GOP’s grassroots conservatives, she has drawn their anger. The fight against cronyism “is as much, or more a fight with Republican insiders, like Karl Rove, than it is with liberals and Democrats,” the staff wrote.

The Tea Party is not merely a rebellion against Obama, but is equally a rebellion against the GOP abandoning its principles. “When the election was over and McCain’s content-free campaign went down in flames, the grassroots looked to Sarah Palin for the conservative leadership and inspiration that no other major Republican figure was offering.”

ConservativeHQ staff said the grassroots conservatives with Gov. Palin as their leader were akin to peasants with pitchforks and scythes rebelling against a king and his lords in the castle, making them unhappy. Establishment insiders make money whether Republican campaigns win or lose. Gov. Palin and her supporters are a mortal threat to them, because by educating conservatives that “content-free” campaigns are worthless, “the entire feudal system of the establishment Republican Party would collapse, and [the establishment insiders] would be out an awful lot of money.”

Gov. Palin’s message goes back to the days that Teddy Roosevelt founded the progressive Bull Moose Party, which went defunct eons ago.

“What is new is that, perhaps for the first time since Ronald Reagan became a national candidate, the grassroots conservatives who supply the votes, manpower and contributions to elect Republicans are beginning to understand that to get governance according to conservative principles, they first have to throw-out the current Republican establishment and then elect principled limited government constitutional conservatives as their leaders.

Leaders such as Sarah Palin.”

Whether Gov. Palin will run for elective office again is an unknown, ConservativeHQ staff wrote, but “right now Sarah Palin is performing a service greater than almost any she might fulfill in public office, and that is rallying grassroots conservatives to reject the inside “business as usual” elite of the Republican establishment and demanding leaders who are willing to stand for, and fight for, limited government constitutional conservative principles.”

ConservativeHQ staff said if Gov. Palin helps conservatives win this 100-year war “for the soul of the Republican Party…she will have earned her place among America’s great political leaders whether or not she ever again holds public office.”

The ConservativeHQ petition to Rove demanding that he stop disrespecting Gov. Palin is still running, and Palinistas should sign it.