(The following is a guest submission by Ron Devito.) 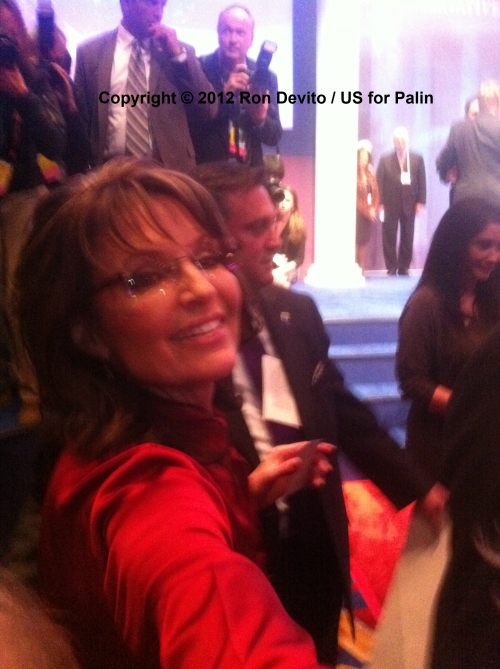 File Photo: Former Alaska Governor Sarah Palin works the rope line at CPAC 2012 one minute after my moment with her.

By now, everyone has seen Scottie Hughes’ meltdown over not getting a media interview and/or meet and greet with former Alaska Governor Sarah Palin at CPAC 2013. Tony Lee, Adrienne Ross, Kevin Scholla, and Michelle McCormick, Brian Lerch have more than adequately responded to it. Now it is my turn.

On Meets and Greets

In a prepared statement I left for today’s Dr. Gina Loudon Show, I referred listeners to the page titled “Gov. Palin Experiences” which is a repository of memoirs from staff who have interacted with Gov. Palin at her events over these past nearly five years. You can read about all our interactions there – including mine – and draw your own conclusions.

In each of the more than five times I encountered Gov. Palin and witnessed her interaction with others, she was gracious, kind, humble, and was one of us. She looks everyone in the eye. She remembers faces and names – and this through the hundreds of thousands of people she must have met. She’s signed just about anything that can be signed including body parts that got tattooed. She was gracious and forgiving even when people pushed beyond the bounds of appropriate behavior in various ways. She accepted all of us equally, with all our faults and imperfections.

No reporter got a media interview with Gov. Palin at CPAC 2013, and even the top flight pros have a hard time getting interviews with her as a general rule. With her online outburst, Hughes more than likely burnt her chances of ever getting an interview. Why should Gov. Palin or her staff want to even bother now? Given how the media has treated her, I don’t think Gov. Palin can be faulted for being parsimonious with and skittish about media interviews. Though I’m a site publisher, I never interviewed Gov. Palin, and I never attempted to either. For one thing, Gov. Palin’s speeches are clear and plain-spoken – everything that needs to be said is contained within them. Most interviews end up consisting of “when are you going to announce your candidacy for [fill in the blank].” If I were going to interview Gov. Palin, I wouldn’t even ask her about politics. My questions would be about leadership and time management and about her as a person.

On Choosing Palin Events to Attend

Not every Palin event includes an opportunity for the grassroots to meet and greet. It’s just a fact of life. Some, like the forthcoming Schiavo gala and Shareholders in Life are fund-raisers where the point of the event is to raise money for the organizer. Meet and greets at these events are reserved for tables of top tier sponsors. These events are often closed to the press too. Gov. Palin was not the keynote speaker this year at CPAC. She was a regular speaker with a 20-minute slot, and had over 20 speakers and panelists after her. As it was, she went over her allotted time. A rope line was simply impossible. What little time she had left was reserved for CPAC volunteers, the College Republicans and a few others.

Hughes – who up till yesterday at least was a Palinista – should have had the common sense and experience to know that Palin events come in different formats and flavors. Some Palinistas are content to just sit in the audience and see Gov. Palin at a distance. If this describes you, any Palin event is fair game for you to attend. Others like myself want what I can best call – “a more complete experience.” For me that means very carefully picking and choosing the events I attend and do on-location coverage for. That is why I was at CPAC 2012 and why I covered CPAC 2013 from afar. That is not an indictment of Gov. Palin in any way, shape or form. It’s a function of my own expectations and psychological makeup.

You don’t go to an event like CPAC 2013 and expect a rope line. If you want a rope line, you go to events like Indianola, CPAC 2012, or campaign stump barbecues. As an unknown media entity, you don’t go to any event and expect a media interview when even known entities are not getting them. You certainly don’t get media interviews by trashing the proposed subject of your desired interview in a public forum for all the world to see. Other figures may very well see Hughe’s behavior and decide they are not going to take a risk with her, and rightfully so.

Having met Gov. Palin does not make me any more important or better than anyone else. I’m just an ordinary person who has had extraordinary experiences and hope to have many more like them.