(The following is a guest submission by Ron Devito) 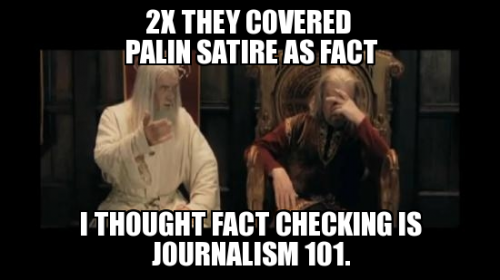 One of the fundamental tenets in Journalism 101 is to check facts, ensuring that a story is covered accurately and truthfully. Satire is a form of humor often used for political editorials and former Alaska Governor Sarah Palin – like every other person who has held elective office – has been the subject of satire. No one in politics is immune to the genre, nor should they be. It’s important to laugh at ourselves once in a while, especially in today’s hyper-sensitive, politically correct world where everyone appears to find everything “offensive.” But, a professional reporter should know the difference between satire and genuine news so as to cover it accurately, especially when the original publication is dedicated to satire….

Bill Hoffmann, NewsMax reported that The Daily Currant – “the Global Satirical Newspaper of Record” – wrote a satirical piece which had Gov. Palin calling for the invasion of the Czech Republic in response to the Boston terrorist attack. The Currant spun a yarn about Gov. Palin giving an interview on Fox – with whom she has not been under contract in over four months – in which she “confused Chechnya and the Czech Republic.”

Enter Wprost, a leading European weekly out of Poland which went into full-scale panic mode and published an article headlined, “Let’s burn Prague: Sarah Palin Calls for the Invasion of the Czech Republic.” The paper’s readers got the story right and questioned it on Facebook. The embarrassed Wrpost subsequently pulled the article, according to the journalism blog JimRomenesko.

On February 12, the Washington Post re-published as fact a satire piece to the effect that Gov. Palin had signed a contract to be an Al Jazeera host. Wrpost apparently followed in the Washington Post’s footsteps. You see, the Al Jazeera satire also was originally published in The Daily Currant – that is the “the Global Satirical Newspaper of Record.”

A reasonable person can draw only one of two conclusions: the reporters covering these stories are grossly incompetent, or covering satire as news is a new poor Alinskyesque attempt to smear Gov. Palin with a phony meme. You decide which it is.