Thanks to Ron Devito for submitting. 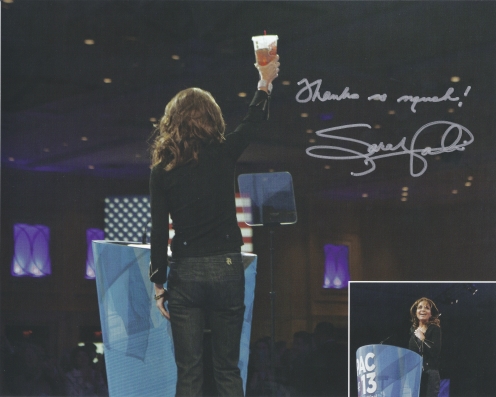 Ed. Note: The following letters were sent via Postal Mail by SarahPAC. Every attempt has been made to reproduce them as faithfully as possible to their original formatting.

Though not requested in these letters and not authorized by SarahPAC, now is a good time to bundle a small-donor money bomb with this. Imagine if half of the over 3.5 million supporters on Gov. Palin’s Facebook page donated just $2. SarahPAC would raise $3.5 million minus transaction fees. If half these supporters donated just $5, SarahPAC could have $8.75 million. With $10 donations, half of the supporters on Gov. Palin’s Facebook wall could generate $17.5 million for SarahPAC. Though this fund-raising letter is geared toward mid-range donors, donations of any amount will help SarahPAC and make a big difference. 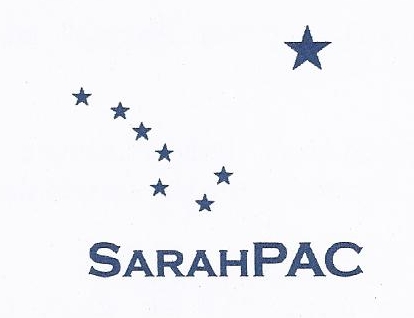 During her speech, she paused for a moment, pulled out a “Big Gulp” soda pop, and took a nice long drink.

As she put it, “Oh, Bloomberg’s not around. Our Big Gulp’s are okay. Shoot, it’s just pop with low-cal ice cubes in it. I hope that’s okay.”

It was such a great moment.

A wonderful illustration of how absolutely ridiculous the liberals have become in their efforts to have the government run every aspect of our lives.

And as one of SarahPAC’s generous supporters, I want you to have this exclusive photo of that special moment.

After the speech, some even called it the “Palin Liberty Pose” saying Gov. Palin looked like the Statue of Liberty as she held her Big Gulp aloft.

But if you know Gov. Palin, you know it’s never about her. It’s about this great country you and I love.

And that’s what Sarah talked about during her speech:

The greatest lie that the government tells is that government is the way to realize this guarantee. There is a simple reason why Washington, DC is an island of prosperity in a nation mired in near recession. Whenever government expands, it’s the well-connected that reap the benefit. The more government intrudes into our lives and businesses, the more it picks winners and losers.

The more crony capitalists win, the more the rest of us lose. Whether it’s green energy or free Obama phones or prophylactics, if you don’t have a team of lobbyists in DC or a canceled contribution check, you’re not at the table – you’re on the menu.

As you know, [Donor], our goal here at SarahPAC is to put an end to this big government, crony capitalism approach by electing principled leaders who will stand for freedom.

People like Sen. Ted Cruz, who’s been doing an amazing job in Washington and introduced Gov. Palin at CPAC by stating: “I would not be a Senator today if it weren’t for Sarah Palin.”

[Donor], Ted Cruz can say that because of you.

It’s your support for SarahPAC that allows Gov. Palin to have such an impact on political races.

And, my friend, we’re just getting started.

Gov. Palin concluded her remarks at CPAC with this:

I have been so blessed to spend so much of these past years getting to know even more of America, not from the top down, but from the heart looking out.

And this I know, there is more wisdom, more character, more grit and common sense in the soldiers and the Mom’s and the teacher’s and the laborers and the firemen and the fishermen and the students and the cowboys – and other extraordinary Americans that I’ve met along the way, than will ever be found in the cocktail parties of power across the river.

And if “We the People” have one message to send to Washington, I’m sure it would be this: Get Over Yourself. It’s not about you.

Isn’t that the truth!

It’s not about the consultants and pollsters and power brokers who think they know so much.

It’s about America. And freedom. And liberty. And principles. And the Constitution.

[Donor], I’ve said this before, but let me just say it once again.

We want to elect people who will “fundamentally transform the way Washington does business.”

Leaders who will put:

***and foundational ideals over self interests

Will you continue to help us, [Donor]?

Can I count on you to continue standing with Governor Palin and SarahPAC?

Whether $100, $150, $200, or any other amount, every dollar you can send will make a real difference as Governor Palin and our entire SarahPAC team work to elect a new generation of conservative leaders.

Leaders who will stand against the big government, big spending, crony capitalists in BOTH parties.

Thanks in advance for your generosity and faithfulness. And thanks for standing with Gov. Palin for liberty and freedom!

P.S. [Donor], I hope you enjoy the picture of Gov. Palin at CPAC, holding her “Big Gulp” aloft and standing for liberty. Thanks again for your tremendous support of SarahPAC and Gov. Palin. God bless!

P.P.S. There’s a reply form on the back of this page. fill it out right now and send it back to me today.

Mail Checks and Money Orders to: