Lee Greenwood, writer and singer of the timeless classic God Bless the USA said on the Palin Update with Kevin Scholla that being on the campaign trail with former Alaska Governor Sarah Palin was terrific. Greenwood made stops in Las Vegas and Scranton, PA during the 2008 campaign. He traveled to Alaska as a teenager and wrote Home to Alaska. “Sarah Palin is the most delightful person in person. She is a great family woman, a great wife. Her husband and her have a terrific marriage. It was great to get to know her,” he said.

Greenwood said Gov. Palin is smart, “knew where to draw the line between on stage and off stage,” but spread herself thin by giving of herself to others. “I liked how she ran her ship,” he said.

God Bless the USA was written in 1983, became Number One in Nashville in 1985 and was used on the campaign trails of Presidents Reagan, George H.W. and George Bush, and also across the aisle. It helped unite the nation after the 9/11 atrocities.

Greenwood’s “The American Patriot” exhibit will be at the Country Music Hall of Fame in Nashville, TN for a year.

Though our freedoms are under attack, Greenwood’s lyrics remain timeless. He is considering revising the lyric: “men who died” to “ones who died,” to honor the many women in military service.

Greenwood said a Palin administration would be much different from the Obama administration, specifically respecting our Constitution and all its Amendments.

Gov. Palin referenced God Bless the USA on social media recently and Scholla harkened back to his interview of her cousin JD Morgan who is a rock singer. Greenwood said he has heard Gov. Palin singing behind him and she sings well.

Greenwood only wears his trademark red, white and blue jacket for public patriotic events and it is on display at the Country Music Hall of Fame.

Greenwood and Scholla discussed trends in the country music scene. Greenwood goes on tour this November, he is working on a live album including fan-submitted pictures, corporate shows. Last year, he published Does God Still Bless the U.S.A.? 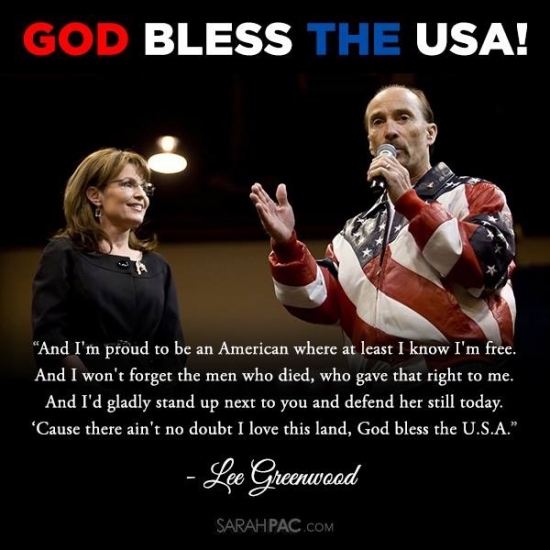 Susan Stimpson expressed her concern that the GOP has not learned its lesson about “electable” candidates versus candidates who uphold the party’s platform. She came out against New Jersey Governor Chris Christie’s bullying tactics.

Steel Resolve: New Fed Chair of, by, for Elites

Larry Summers who Obama might appoint to replace Ben Bernanke is of the elites, by the elites and for the elites of both parties, Sarah Steelman said in her weekly Steel Resolve segment. She said Summers would maintain the status quo.

Lee Greenwood is the guest on The Palin Radio Update with Kevin Scholla! The patriotic singer and songwriter talks about his timeless hit God Bless The USA, campaigning with Sarah Palin, and more. Governor Palin takes to social media for a humorous shout out to our military. Also a Bristol Palin blogging post is highlighted, Governor Palin gives Obama some advice regarding John McCain, and another Barracuda bounce for Fox News. Plus, a new edition of Commonwealth Commonsense with Susan Stimpson. Steel Resolve, our weekly commentary with Sarah Steelman is featured as well.

Listen anywhere, anytime. Save this audio to your device.

THOMAS is an Editor at Conservatives4Palin, and Chairman of the Board for American Grizzlies United. Mr. Schmitz is a Southern California native based in Hollywood. Thomas‚Äô controversial pop culture approach to modern politics delights supporters and offends critics. Mr. Schmitz has been described as, ‚Äúculturally rebellious‚Äù, and a ‚Äúrebel with a cause‚Äù.