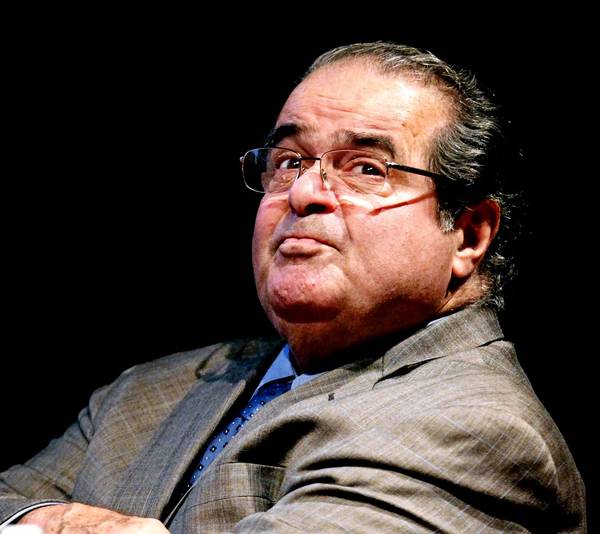 Please take a moment to read this fantastic interview with SCOTUS Associate Justice Antonin Scalia. Some excerpts below:

What’s your media diet? Where do you get your news?

Well, we get newspapers in the morning.

“We” meaning the justices?

No! Maureen and I.

I usually skim them. We just get The Wall Street Journal and the Washington Times. We used to get the Washington Post, but it just … went too far for me. I couldn’t handle it anymore.

What tipped you over the edge?

It was the treatment of almost any conservative issue. It was slanted and often nasty. And, you know, why should I get upset every morning? I don’t think I’m the only one. I think they lost subscriptions partly because they became so shrilly, shrilly liberal.

On the State of the Union Addresses

Let’s talk about the state of our politics for a moment. I know you haven’t been to a State of the Union address for a while, and I wanted to know why.

When was the last time you went to one?

Oh, my goodness, I expect fifteen years. But I’m not the only one who didn’t go. John Paul Stevens never went, Bill Rehnquist never went during his later years. Because it is a childish spectacle. And we are trucked in just to give some dignity to the occasion. I mean, there are all these punch lines, and one side jumps up—­Hooray! And they all cheer, and then another punch line, and the others stand up, Hooray! It is juvenile! And we have to sit there like bumps on a log. We can clap if somebody says, “The United States is the greatest country in the world.” Yay! But anything else, we have to look to the chief justice. Gee, is the chief gonna clap? It didn’t used to be that bad.

Can we talk about your drafting process—
[Leans in, stage-whispers.] I even believe in the Devil.

Every Catholic believes this? There’s a wide variety of Catholics out there …

If you are faithful to Catholic dogma, that is certainly a large part of it.

Have you seen evidence of the Devil lately?

You know, it is curious. In the Gospels, the Devil is doing all sorts of things. He’s making pigs run off cliffs, he’s possessing people and whatnot. And that doesn’t happen very much anymore.

So what’s he doing now?

What he’s doing now is getting people not to believe in him or in God. He’s much more successful that way.

That has really painful implications for atheists. Are you sure that’s the ­Devil’s work?

I didn’t say atheists are the Devil’s work.

What happened to him?

He just got wilier.

Isn’t it terribly frightening to believe in the Devil?