The Lesson in MSM’s Response to Rudy

The Lesson in MSM’s Response to Rudy 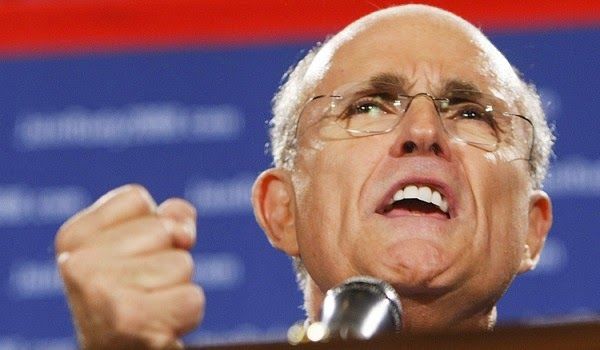 A week or so ago, the MSM wanted Rudy Giuliani boiled in oil for daring to question Obama’s love for America. They were shocked and outraged. How dare Rudy be so rude to Obama. They ran to Republicans for comments, hoping they would throw Rudy under the bus. As I watched the MSM go nuts over Rudy’s “rudeness”, I thought, give me a break.

This man (Obama) just unlawfully took over the internet. Obama refuses to acknowledge the radical Islamic Holy War and slaughter of Christians. ISIS publicly raped a three year old girl. Women are forced to divorce their husbands to be sold as sex slaves.

And how does Obama suggest is the best way to deal with these evil monsters? Job programs.

His bait and switch lie to pass Obamacare has cost millions healthcare plans they liked. Cancer patients are in fear for their lives because Obamacare caused them to lose their doctors.

Under Obama more folks are going out of business than starting businesses (oppressive regulations, anti-business climate and taxes).

Obama ignored the rule of law for his executive action on immigration. In essence, he unilaterally granted amnesty to over 5 million illegals. And guess what folks, Obama’s illegals will be eligible for Earned Income Tax credit possibly receiving up to $24,000. Illegals!!!

Determined to cram his will down our throats, King Obama has decreed back door gun control with bans on bullets.

A prolific liar, Obama’s long list of lies to the American people makes him peerless among U.S. presidents. Shamefully, our president even won PolitiFact’s 2013 “Lie of the Year” award.

Clearly over the next two years, Obama intends to unilaterally ram through into law every item on the socialist/progressive dream list via executive order, or should I say King Obama decree. Almost daily Obama usurps more unlawful power, taking illegal actions yielding devastating consequences on our country and the lives of Americans.

And what has the MSM foaming-at-the-mouth mad? Rudy’s rudeness to Obama. Are you freaking kidding me?

Folks, if this does not tell you where the MSM is coming from, nothing will. Any Republican thinking they will receive fair and balanced coverage from the MSM is an idiot. All the MSM cares about is assisting in the furtherance of Obama’s agenda and protecting his presidency/legacy. Period.

So all you guys in the GOP pandering to the MSM, stop it. They are going to trash you no matter what you do. Focus on pleasing your extremely frustrated base who recently gave you the Senate in a landslide victory. There’s an old saying, “Dance with the one who brought you.”

Love of country and my faith in God strengthens and keeps me hopeful and determined to continue fighting the out-of-control tyrannical megalomaniac in the Oval Office. I will not lie to you folks, the lack of “real” push back from the GOP is extremely frustrating. Even with control of the House and Senate, the GOP never seems to have enough power to stop Obama’s hostile revolution. They continue to concede battles while promising to stop Obama next time.

Rudy’s speech in which he boldly and passionately chronicled all the crap Obama has dumped on the American people over the pass six years had patriots across America standing up and cheering. Yes, I chanted, “Rudy!” “Rudy!” “Rudy!”

Finally, someone had the courage to say it out loud without fear of Obama’s MSM. Frankly, I am seeing signs of others in the GOP feeling emboldened following Rudy’s lead; boldly telling the truth about Obama.

As for the power of Obama’s MSM and army of thuggish operatives, Scott Walker’s success proves that they can be beaten. Walker took all of their best punches, defeating them in three highly contested elections. Consistently, Scott Walker ignored media and Obama operative attacks and focused on serving his constituents.

Not saying that Walker is my guy for 2016, but this is the kind of conservative leadership, backbone and commitment to governing according to the best interest of We the People, so desperately needed in Washington.

The MSM’s outrage over Rudy’s “rudeness” has further exposed who they truly are; not reporters. They have laid their journalistic integrity on the alter, offered up in worship; cult followers of Obama – his minions. GOP, seeking praise, fairness or approval from the MSM is a fool’s mission. Stop it and do right by your people.