Mark Levin discusses his latest book, ‘Plunder and Deceit’, a treatise for the salvation of post-constitutional America with Fox News host Sean Hannity. 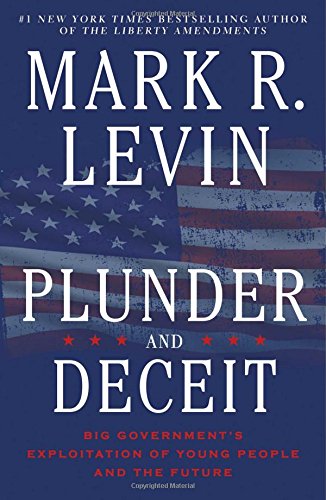 In each of his astounding #1 New York Times bestsellers, Mark R. Levin’s overlying patriotic mission has been to avert a devastating tragedy: The loss of the greatest republic known to mankind. But who stands to lose the most?

In modern America, the civil society is being steadily devoured by a ubiquitous federal government. But as the government grows into an increasingly authoritarian and centralized federal Leviathan, many parents continue to tolerate, if not enthusiastically champion, grievous public policies that threaten their children and successive generations with a grim future at the hands of a brazenly expanding and imploding entitlement state poised to burden them with massive debt, mediocre education, waves of immigration, and a deteriorating national defense.

Yet tyranny is not inevitable. In Federalist 51, James Madison explained with cautionary insight the essential balance between the civil society and governmental restraint: “In framing a government which is to be administered by men over men, the great difficulty lies in this: you must first enable the government to control the governed; and in the next place oblige it to control itself.”

This essential new book is, against all odds, a likeminded appeal to reason and audacity—one intended for all Americans but particularly the rising generation. Younger people must find the personal strength and will to break through the cycle of statist manipulation, unrelenting emotional overtures, and the pressure of groupthink, which are humbling, dispiriting, and absorbing them; to stand up against the heavy hand of centralized government, which if left unabated will assuredly condemn them to economic and societal calamity.

Levin calls for a new civil rights movement, one that will foster liberty and prosperity and cease the exploitation of young people by statist masterminds. He challenges the rising generation of younger Americans to awaken to the cause of their own salvation, asking: will you acquiesce to a government that overwhelmingly acts without constitutional foundation—or will you stand in your own defense so that yours and future generations can live in freedom?

It is also available on Amazon HERE

and at the Barnes and Noble site HERE