Two white cops entered as Mary and I were enjoying coffee in Starbucks. Mary suggested we pay for their purchase. I’m an American who happens to be black. I approached the officers, “Excuse me. May my wife and I pay for your purchase? It is our way of saying we think the Black Lives Matter movement is stupid and evil.” The stunned officers smiled exchanging glances. One replied, “If you really want to, sure.” After receiving their order, the officers thanked us again. I said, “Thank you for serving us.” The encounter felt great! 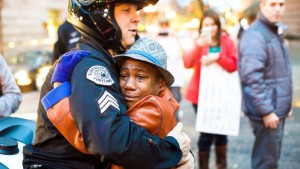 Folks, I have about had it being cautioned to play nice with evil; show sympathy and understanding – be careful not to offend Black Lives Matter thugs. The heck with that. BLM is purposefully divisive, founded on the lie that black criminal Michael Brown was murdered by a white cop while surrendering with his hands up. The truth is Brown was shot assaulting a police officer. BLM organizers know the truth. The movement is designed to create racial hate, chaos and an opportunity to exploit white America and government for handouts and payoffs. It is a despicable evil scam. I will not honor it with an ounce of respect.