Democrat leader Nancy Pelosi sent President Trump a letter today, all but rescinding an invitation for President Trump to deliver the State of the Union address before a joint session of Congress. Pelosi cited “security concerns” and the shutdown as her reasoning, suggesting that the President either postpone the traditional address, or deliver his assessment of the “State of the Union” in a letter on Congress.

Pelosi’s “concerns” are completely unwarranted, and her suggested options must be rejected.

The Department of Homeland Security and the US Secret Service are fully prepared to support and secure the State of the Union. We thank the Service for their mission focus and dedication and for all they do each day to secure our homeland.

Secret Service is fully ready to offer full protection during the #SOTU, a sr. law enforcement official tells @petewilliamsnbc.
"It's a no-fail mission," the official says.
Though USSS personnel are not being paid, the intelligence & protection functions are fully staffed. (1/2)

Tyrant Pelosi’s belief that it is she who sets the terms of a SOTU address is a mark of her unbridled arrogance.

The formal basis for the State of the Union Address is from the U.S. Constitution: The President “shall from time to time give to the Congress Information of the State of the Union, and recommend to their Consideration such measures as he shall judge necessary and expedient.” Article II, Section 3, Clause 1.(House.gov)

No where in the constitution is it stated where, when, or how this requirement is to be satisfied. It is solely at the President’s discretion. The tradition that the State of the Union be delivered to a joint session of Congress is only that, a tradition.

President Trump will make the decision as to how this year’s State of the Union will be delivered, and the Twitter-verse is full of suggestions.

President Trump should tell Pelosi she can watch the state of the Union: on TV while he delivers it from the White House in front of an audience of veterans and angel moms

RT if you agree

President @realDonaldTrump should deliver the State of the Union at the border, to a crowd of 10,000.

It is legal and can be funded by the government. He need only send a transcript or video to Congress.

He should invite all Members of Congress too.

If @SpeakerPelosi disinvites @POTUS to provide the annual #SOTU address in the House chamber, I will be calling on @senatemajldr Mitch McConnell to invite Pres. Trump to give his speech in the Senate Chamber –> https://t.co/o0Mfc050lR

Weather permitting, perhaps the White House lawn is the ideal location for this year’s address. Ample room for the 535 members of Congress, Cabinet members, Supreme Court Justices, Joint Chiefs, and invited guests. Imagine the optics to the nation if a block of 282 seats reserved for Congressional Democrats are left vacant by the obstructionist opposition. Wouldn’t that be a picture for the public to witness.

Despite Nancy’s tyrannical attempt to hijack the process, it is President Trump who remains in control and will determine how this year’s State of the Union will be delivered.

For those interested, here is Petty Pelosi’s letter to our President: 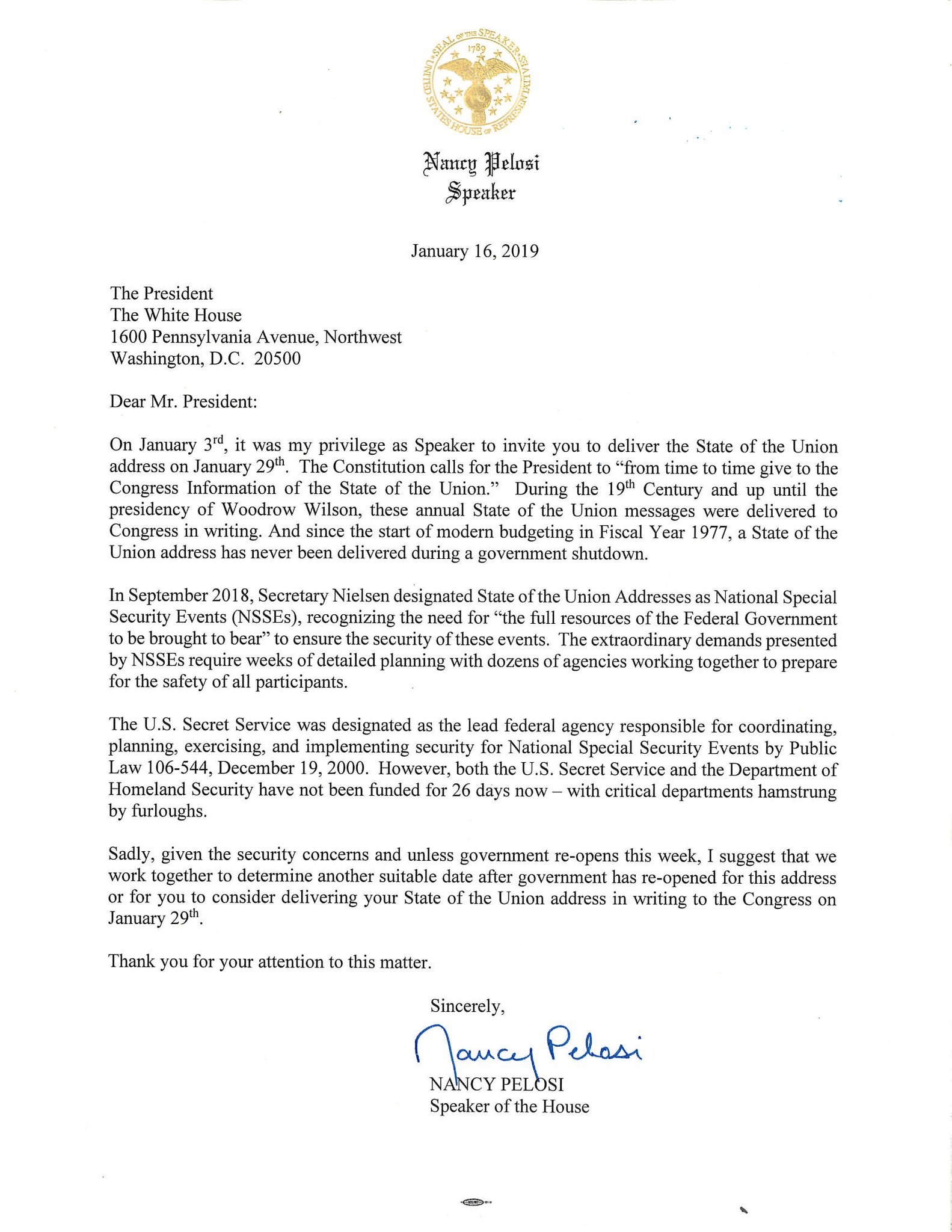